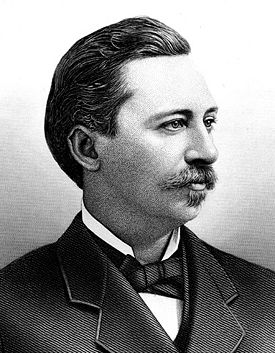 Henry Martyn Caldwell (born September 5, 1836 in Greenville, Butler County, died August 7, 1895 in Birmingham) was, from 1875 until his death, president of the Elyton Land Company which had created the city of Birmingham and continued with the work of developing residential and resort properties in the city. He also founded the Birmingham Trust and Savings Company and helped found 1st Presbyterian Church in Birmingham.

Caldwell was born in 1836 to North Carolina native John Caruthers Caldwell and the former Elizabeth Black, of South Carolina, in the town of Greenville, Alabama, where he attended school before traveling to the University of Pennsylvania to study medicine.

After graduating he returned to Greenville and practiced his profession until entering the service of the Confederate Army at the start of the Civil War. He entered the 33rd Alabama Infantry as a surgeon and served through the entire course of the war, returning to his Greenville practice, where he was joined by his brother-in-law Willis Milner.

Caldwell also started a sawmill business in Greenville that became very successful. In 1870 he invested his earnings with the Elyton Land Company which was pursuing an industrial development venture that would, almost exactly one year later, be realized as the city of Birmingham. His investment represented 120 of the 2000 initial shares of stock. The company laid out the city and oversaw the sale of lots, reserving sites for industry, parks and churches.

In 1875, during a period of great uncertainty for the company's survival, Colonel James Powell resigned as president and Caldwell was named to assume the office. Birmingham's fortunes picked up with the establishment of the Alice Furnace by Thomas Hillman and Henry Debardeleben. The company finally emerged into the black in 1883 and used its land-holdings and available capital to encourage the building up of other foundries, furnaces and manufactures along the Railroad Reservation. Caldwell backed John T. Milner in the creation of Milner Coal and Railway Company and later hired Milner's half-brother Willis J. Milner as an officer of the Elyton Land Company.

It was under Caldwell's direction that same year that the company began developing Highland Avenue and its streetcar line, the Birmingham Belt Railroad, and Lakeview Park. He also oversaw the purchase of the Birmingham Water Works Company in 1885 and the subsequent tapping of Five Mile Creek.

The two years following represented the great booming period of real-estate speculation in the city and, as principal agent for the city's available land, Caldwell was kept busy each day pricing and drafting sales receipts for properties that were often sold hours later at sizable profit. While the company saw record profits, speculators made out like bandits.

When the bubble burst the company, like many other landowners who were no longer able to sell unimproved property for profit, undertook a program of building. In 1889 the company erected the Caldwell Hotel to improve the state of lodgings in the city. It invested $1 million in a new rolling mill and other projects to cement the position of Birmingham as the primary industrial center of the South. In the same resolution, the company granted it's president, Caldwell, a residential lot of his choosing on Highland Avenue. Shares in the company, which in 1873 had traded for as little as $15 were now being sold for $4,000 on the open market. The company re-invested in tapping the waters of the Cahaba River by building the Cahaba Pumping Station in 1887.

Caldwell also organized the Birmingham Trust and Savings Company and also served as a director of First National Bank and of many of the young city's iron-making operations. He was one of the founders of the First Presbyterian Church, now the oldest church building in the city. He was also an active member of the Free and Accepted Order of Masons and, in 1878 served briefly as Mayor after the death of W. H. Morris. His manuscript history of the Elyton Land Company was published in 1892.

Caldwell married Elizabeth Milner, the sister of his chief operating officer, Willis J. Milner. He had four children, John, Charles, Beatrice and Pauline. Caldwell died in 1895, a year after the hotel that he named for himself had burned to the ground. He is buried at Oak Hill Cemetery. Caldwell Park and Caldwell Avenue still bear his name.

In the 20th century it has been suggested more than once by Jefferson County Commission president Larry Langford and by former Birmingham City Council member John Katopodis that Caldwell should have his name removed from Caldwell Park (with the honor going instead to long-time council member Nina Miglionico). Supporters of the change have pointed out that Caldwell owned slaves and served in the Confederate Army and is thus undeserving of such a high civic honor. Opponents have chosen to frame the debate in terms of avoiding the precedent of renaming public parks at whim and have suggested other ways to honor Miglionico.