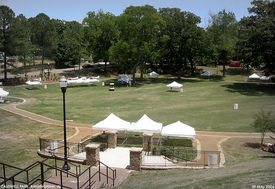 Caldwell Park is the westernmost of three small parks occupying low-lying basins along Highland Avenue in the Highland Park neighborhood of Birmingham. The parks were designed along with the avenue as collection areas for rainfall, unsuited for building but ideal for aesthetic and recreational use.

The park has been home to many cultural events, including performances of the Park Players, the Alabama Symphony Orchestra's Sounds for Summer program, and Do Dah Day. Adjacent to the park on Naizuma Avenue is the Virginia Samford theatre and the offices of the Metropolitan Arts Council. Across Niazuma is the former site of the Otto Marx residence, now the site of 2600 Highland, a condominium development. Other sites facing the park include First Lutheran Church and Highland Crescent, on the former site of John Carroll Catholic High School.

Caldwell Park was part of the Elyton Land Company's 1,500-acre South Highlands development, initiated in 1884 and supervised by chief operating officer Willis J. Milner. Willis' half-brother, John T. Milner, laid out the designs on site. The park is named for physician and former president of the Elyton Company, Henry Caldwell, who participated in the design of the avenue.

in 1975 Environmental Design Collaborative designed and installed new landscaping, lighting and irrigation along Highland Avenue and in all three parks at a cost of $1,500,000.

In 2005 the park underwent extensive refurbishing with new sewer mains, paths, lighting, and an outdoor stage area. The stairways down into the park bowl were partially reconstructed with new code-required handrails and guardrails. The park reopened in early May, 2006, just in time for that year's Do Dah Day.

In July 2006 former City Councilor John Katopodis proposed renaming Caldwell Park in honor of long-time councilor Nina Miglionico. He suggested that Dr Caldwell's prior history as a slave-owner made him less deserving of the honor than Migliodico who courageously championed progressive social issues in a turbulent period in Birmingham's history. The Birmingham Park and Recreation Board tabled the proposal pending input from the Neighborhood Association, which overwhelmingly rejected the change.