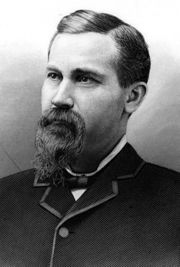 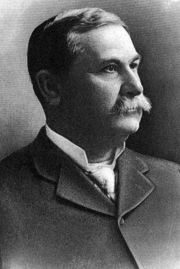 Robert Henry Pearson (born 1849 in Barbour County; died October 16, 1909 in Birmingham) was an attorney and real estate investor, and one of the first residents of Birmingham.

Pearson, the son of Benjamin and Harriet Pearson, originally from North Carolina, was educated at home and worked as a school teacher at Midway before enrolling at the University of Tennessee. He then completed a course at the Lebanon Law School in 1871, entering the bar in Barbour County. Within a year, though, he moved to Birmingham. He was one of the attendees at Charles Linn's "Calico Ball" on December 31 of that year, and married the former Sallie Harrison in 1876.

In addition to working as an attorney with offices in the Roden Block, Pearson acquired several properties in the city, favoring corner lots which he controlled through his Pearson Railroad & Development Company. He invested in the Avondale Land Company and the East Lake Land Company. He also bought James Pierce's interest in mining lands near Warrior and founded the Pearson Coal & Coke Company to develop them, beginning with the Wolf Den Hollow Mine. Later he acquired additional coal land near Kimberly, which he sold to Benjamin Roden's Central Coal Company, joining its board as a director. He and Roden later organized the Jefferson Coal & Coke Company, and in 1908 organized the Pearson Coal & Iron Company.

Pearson was a founding director of the Birmingham Street Railway Company. He also helped organized the Episcopal Church of the Advent, serving on its first vestry and as senior warden.

Earlier in his career, Pearson declined several entreaties to enter politics. He did serve as chair of the Jefferson County Democratic Executive Committee for two terms and spent four years as an assistant solicitor for the Jefferson County Circuit Court. Later he served as Birmingham City Attorney and, briefly, filled the office of Mayor of Birmingham.

Pearson was appointed to the board of arbitration that settled the 1903 coal strike.

Pearson died in 1909 and is buried at Elmwood Cemetery. He was survived by his wife and daughters, Mamie and Roberta.