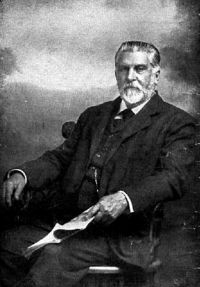 Curry was born in Lincoln County, Georgia in 1825. Around age 12, in 1837, his family moved to Kelley Springs in Talladega County. He graduated from Franklin College (now the University of Georgia) in 1843 where he was a member of the Phi Kappa Literary Society. While studying at Harvard Law School, Curry was inspired by the lectures of Horace Mann and became an advocate of free universal education.

After the war he studied for the Baptist ministry, but the focus of his work was free education in the South. He traveled and lectured in support of state normal schools, adequate rural schools, and a system of graded public schools. In November 1865, he presided over the Alabama Baptist Convention and became president of Howard College, then located in Marion. He was ordained in January 1866 and gave more than 100 sermons during the year despite not accepting a number of pastorates offered to him. Worried about raising funds for Howard College and disheartened by the pro-Unionist control of Alabama government, he left the state to accept a professorship at Richmond College in Virginia (now the University of Richmond) in 1868.

From 1881 until his death he was agent for the Peabody Education Fund and Slater Fund to aide schools in the South and was instrumental in the founding of the Southern Education Board. Birmingham's Curry Elementary School and The Curry School of Education at the University of Virginia were named for him.

Curry served as envoy extraordinary and minister plenipotentiary to Spain from 1885 to 1888, and as ambassador extraordinary to Spain on the coming of age of King Alfonso XIII in 1902. His publications include works on education, American government, and Spanish history. He was awarded the Royal Order of Charles III and several honorary degrees. Curry died in February 1903, and is buried in Richmond, Virginia.

Until October 2009, Jabez Lamar Monroe Curry was honored by one of Alabama's two statues in the United States Capitol's National Statuary Hall Collection. It was donated in 1908 and sculpted by Dante Sodini. In October 2009, the statue was replaced with one of Helen Keller, and Curry's statue was displayed in the lobby of Samford University's Beeson University Center until 2018. It was then returned the the Alabama Department of Archives and History.