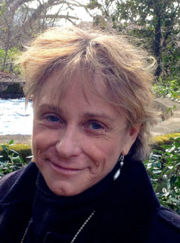 Elizabeth Smith MacQueen (born November 21, 1948 in Birmingham ) is a sculptor.

MacQueen is the daughter of Giles Edwards MacQueen, Jr and Ruth Elizabeth Brooks MacQueen of Mountain Brook. She was the third of four children and grew up in a small ranch style house designed and built by her father on a large wooded lot.

MacQueen studied ballet between the ages of 6 and 18 and taught younger dancers five days a week to pay for advanced lessons at Steeple Arts Dance Academy. At 15 she was crowned "Miss Silver Beach" in Destin, Florida, and later won the Miss Birmingham pageant. As a high school senior she was part of the cast of the Town & Gown Theater's touring roduction of "The Boyfriend".

MacQueen was inspired to pursue sculpture by a visit to the Ringling Museum of Art in Sarasota, Florida. She apprenticed with Georges Bridges and enrolled in studio art classes at Shades Valley High School. She earned a rebuke from her teacher by sculpting a female nude, modeled after her own then-pregnant sister. MacQueen graduated from high school in 1967 and studied fine art and theater at the University of Alabama.

After one year, MacQueen moved to New York City and pursued modeling for LeBann Originals and Fink Brothers Bridal Gowns. She then moved to Los Angeles, California and attended Los Angeles City College in 1972 before earning an academic scholarship to UCLA. She earned a degree in sculpture, painting and design. She was then accepted into UCLA's graduate school of education and completed two teaching degrees. She began tutoring young actors on film sets and pursuing sculpture in her spare time.

MacQueen was married to talent manager Raymond Gonzalez from 1968 to 1971. In the early 1970s, MacQueen began working as a full-time sculptor, residing in Paris, France and Pietrasanta, Italy. She gained experience in the technical aspects of producing cast bronze sculpture and modeled a number of internationally-known dancers, including Jorge Donn.

MacQueen was commissioned to create a full-size dancing figure, "Mudra", for the Carolyn Blount Theater in Montgomery, Donn posed for the piece and MacQueen developed a sophisticated armature to support the 900-pound statue posed in mid-leap. The Blount commission, however, was changed to a figure of "Puck" from A Midsummer Night's Dream before the work was cast. The piece was installed in 1985. Both "Mudra" and "Puck" went on to become some of MacQueen's signature pieces.

In 1989 MacQueen moved to San Luis Obispo, California, where she created another significant sculpture, "Persephone". In 1999 she completed a 34-foot sculpture entitled "The Past, The Present, and The Future" for the Women's Basketball Hall of Fame in Knoxville, Tennessee.

In 1989, MacQueen married Paulist priest Donald J. "Brick" Baxter. They couple has one daughter, Mary Elizabeth. They divorced in 1999.

In 2013 MacQueen was selected to create a Four Spirits memorial to the girls killed in the 1963 bombing of 16th Street Baptist Church. It was cast at Mussi Artworks Foundry in Berkeley, California and installed at Kelly Ingram Park in time for the 50th anniversary of the tragedy.