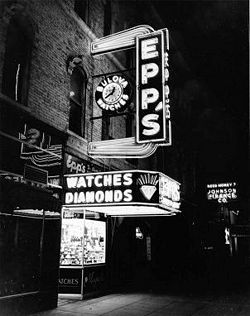 Epp's Jewelry Co. was a jeweler located at 1810 3rd Avenue North. It was owned by Taft Epstein, who specialized in watch repair. Beverly Whitley was a long-time associate at the store.

Epstein sold his business in order to enlist in the army during World War II, but purchased it back after his return.

Epp's advertised heavily in print and on radio and television, sponsoring W. A. Clark's sermons on WJLD-AM as well as live wrestling broadcasts on WBMG-TV. His television ads featured a memorable wind-up toy monkey.

In 1957 Epps had a Bessemer location in the Berney Brothers Block at 125 19th Street North.

The store's street front was modernized in 1961.