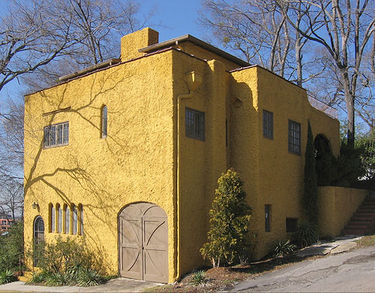 The Frank Anderson residence is a Mediterranean-style stucco house located at 2112 11th Court South on the Southside of Birmingham. It was designed by architect Frank Hartley Anderson for himself and his wife Martha.

Anderson purchased the lot, "the smallest he'd seen in Birmingham" in 1922 and began tackling the challenge of designing a house that could fit on it. The three-story result was constructed in 1924, and was exceedingly innovative in several respects. It pioneered the use of the electric range and dishwasher in Birmingham and made use of a system of passive cooling ducts through hollow tiles in the concrete walls. The upper floor was used as Martha's art studio and gave her access to the nearby kitchen, as well as to a roof terrace for dining al fresco. The living space was on the middle level, accessing an enclosed garden to the rear of the lot. The lower floor, facing the street, housed Anderson's office and a garage/workshop which has its own carriage door.

The Architectural Forum magazine published a feature on the Anderson residence in 1926. The Birmingham Post also ran a feature in 1934.

During the Depression, the Andersons took out a second mortgage, and in 1938 they were forced to sell their home and relocate to Georgia so Frank could work with the Army Corps of Engineers in Atlanta.

For decades, the home was owned by pianist and Birmingham Music Club president Glenn Nichols, and the top-floor studio was furnished with two Steinway concert grand pianos. After he died in the 1980s, the house was purchased by architect and collector Fritz Woehle, who repainted it a yellow ochre color and used it primarily for storage. In 2015 the house was restored and repainted. The wood carriage doors were replaced with a pair of arched French doors and topped with a small pergola. A wooden fence was constructed around the rear garden, as well.