This article is about the Major League baseball player. For the University of Alabama football coach, see Frank W. Thomas. 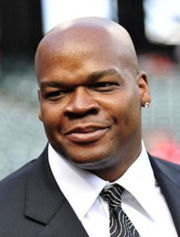 Frank Edward Thomas (born May 27, 1968 in Columbus, Georgia) is a Hall of Fame baseball player who played for the Auburn Tigers and the 1990 Birmingham Barons. He became one of Major League Baseball's biggest stars in the 1990s while playing with the Chicago White Sox.

Known for his intimidating 6'-5", 240-pound frame and his penchant for swinging a heavy section of steel reinforcing bar instead of a bat while on deck, Thomas was given the nickname "The Big Hurt" by broadcaster Ken Harrelson.

Thomas was a first baseman early in his career. Regarded by some as one of the best pure hitters in baseball, he was valued more for his bat than for his defensive skills, and was primarily used as a designated hitter. He was the only player in major league history to hit above .300 for seven consecutive seasons and also recorded at least 100 walks, 100 runs, 100 runs batted in, and 20 home runs each year from 1991 to 1997. Only five players in history who have both hit more home runs and maintained a higher career batting average than Thomas: Hank Aaron, Jimmie Foxx, Mel Ott, Babe Ruth, and Ted Williams.

He was inducted into the Alabama Sports Hall of Fame in 2011 and enshrined in the Baseball Hall of Fame on the first ballot for which he was eligible on January 8, 2014.

Thomas attended Columbus High School in his native Georgia and was a standout in both football and baseball. As a sophomore he hit cleanup for a baseball team that won a state championship. As a senior he hit .440, was named an All-State tight end in football, and played forward for the basketball team. He wanted to play professional baseball right out of high school, but was not selected in the 1986 amateur draft.

That fall, Thomas accepted a football scholarship from Auburn University on the condition he could also play baseball. Coach Hal Baird loved his attitude as well as his power at the plate. He posted a .359 average and led the Tigers in runs batted in as a freshman. During the summer of 1987 he played for the U.S. Pan American Team. He earned a spot on the roster for the Pan American Games, but left to participate in practice as a tight end with the Auburn football team. Injuries early in the season and an offer of a baseball scholarship caused him to focus on one sport. In his sophomore year, Thomas was considered for the U.S. National Team preparing for the 1988 Summer Olympics, but did not make the final roster. In his junior season he hit 19 home runs and 19 doubles, batting .403. As a senior he was voted Southeastern Conference Most Valuable Player and tallied his 49th college home run.

The Chicago White Sox picked Thomas seventh in the first round of the June 1989 amateur draft. He played 17 games in the Gulf Coast League before joining the Sarasota White Sox in the Single-A Florida League. For the year, he hit .296 with five home runs, 41 runs batted in and 42 walks. 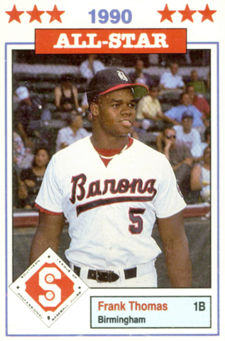 In 1990 Thomas was expected to move to AAA Winston-Salem, but asked for assignment to Birmingham, which was closer to his family. As first baseman for the 1990 Birmingham Barons Thomas hit .323 with 85 runs on 114 hits. He knocked 18 home runs despite the generous dimensions of the Hoover Metropolitan Stadium and also recorded 27 doubles and 112 walks before he was called up. He made his Major League debut with the White Sox on the road against the Brewers on August 2, 1990. In 60 games that season he batted .330 with 7 home runs, 34 runs batted in, and 44 walks. His first home run in the Majors was hit in a game against the Minnesota Twins on August 28, 1990.

In his first full season, 1991, Thomas finished third in MVP voting with a .318 batting average and 32 home runs. He went on to finish in the top 10 of the MVP voting every year through 1997 and won the honor in 1993 and 1994. In August 2001 Thomas underwent surgery to repair a torn medial collateral ligament (MCL). After the 2002 season (in which Thomas had 28 home runs, 92 RBI and 88 walks), the White Sox invoked a "diminished skills" clause in his contract. He rebounded in 2003, hitting 42 home runs despite a .267 batting average, and finished in the top 10 in walks, extra base hits and slugging percentage. Injuries slowed his pace in 2004 and 2005. Thomas was not active when the White Sox won the 2005 World Series, but he was summoned to throw the ceremonial first pitch in the divisional series against the Red Sox.

Thomas signed a one year $500,000 deal with the Oakland Athletics on January 25, 2006 and was slotted into the roster as their everyday designated hitter. He started out slowly, but ended the season as the team leader in home runs, RBI, slugging percentage, and on-base percentage. He provided a powerful right-handed bat in the middle of the lineup for the division-leading Athletics.

Thomas was cheered by Chicago fans in his May 2006 return to Comiskey Park as a visiting player and went on to hit two home runs in the game. Through September 26, he had 38 HRs and 109 RBIs, and was named the American League's player of the week after hitting .462 with five homers and 13 RBIs in the week ending September 10. The Athletics clinched the American League West title, defeating the Seattle Mariners, 12-3 on September 26. During the A's first playoff game on October 3, Thomas hit two solo home runs, leading the A's to a 3-2 win over the Minnesota Twins. His performance during the opening play-off game earned Thomas the distinction of being the oldest player to hit multiple home runs in a Major League Baseball postseason game. He finished 4th in the vote for the American League Most Valuable Player Award in 2006.

On November 16, 2006 Thomas signed a 2-year, $18.12 million contract with the Toronto Blue Jays. He hit his 500th career home run on June 28, 2007 off the Twins' Carlos Silva. He was ejected later in the same game for arguing balls and strikes with the home plate umpire.

Thomas hit a grand slam off Red Sox reliever Manny Delcarmen in the April 6 game to break a 2-2 tie. Nevertheless, manager John Gibbons benched the designated hitter on April 19 and released him the next day. He finished the season back with the Oakland Athletics and appeared in 55 games. He was an unsigned free agent through the 2009 season and ended his career by signing a one-day contract with the White Sox on February 12, 2010 in order to formally announce his retirement from baseball. His #35 White Sox jersey number was retired during a ceremony that August. A life-size bronze statue of Thomas was unveiled in the concourse of U.S. Cellular Field on July 31, 2011.

Since retiring, Thomas has worked as a broadcaster for Comcast SportsNet Chicago and founded the W2W Records label. He is also part-owner of Chicago's Big Hurt Beer brewery.