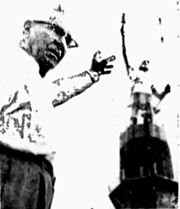 Fred Buettiker (born October 9, 1879 in Grundy County, Tennessee; died July 1974) was a foundry worker and superintendent who was a major contributor to the casting of Vulcan.

Buettiker was the son of Ferdinand and Lucia Sprecher Buettiker, immigrants from Switzerland. The family moved to Elyton in 1886 and Ferdinand died of typhoid the following summer. Fred began working at a foundry at age nine, helping his 12-year-old sister support the family, which included two younger siblings. He walked his four mile commute because streetcar fare would have cost him 2/3 of his wages.

In 1903 Buettiker was one of fourteen foundrymen put to work at the Hood Foundry downtown to mold and pour the iron castings that would be assembled into Giuseppe Moretti's colossal "Vulcan" statue, scheduled to be exhibited at the 1904 World's Fair in St Louis, Missouri. The ambitious schedule for completion kept the workers on site for long hours. For six weeks, Buettiker slept at the foundry as the project was rushed to completion.

Responsible for casting the statue's massive head, Buettiker and his partner, Nick Smith, kept in close contact with the sculptor. The drawback casting process involved building brick and mud molds around the plaster sections supplied by Moretti and his team of sculptors, then pulling them apart so that the plaster could be removed prior to pouring molten iron. The complex beard gave them the most trouble, because if the mud was allowed to stiffen before the mold was pulled apart, it would break the model. Any such incidents that led to modifications of the casting required Moretti's acceptance of the change. In the end, Buettiker had to reach into the soft clay to recreate curls in Vulcan's beard where the molding process had failed.

After four months of around-the-clock work at 35 cents per hour, Buettiker was able to afford to travel to St Louis to see the statue exhibited. After he married Clara Auchenhausen of Cincinnati, Ohio, he brought her to the Alabama State Fairgrounds to see Vulcan. Because she derided the appearance of the statue, he postponed telling her about his involvement in its creation until much later in life. When Vulcan was placed on a pedestal atop Red Mountain in 1939, Buettiker and Smith were recognized as the only surviving molders from the original casting.

When he retired, Buettiker was superintendent of the foundry at Hardie-Tynes Manufacturing Company. He died in 1974 form heart failure.