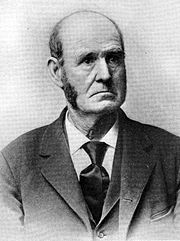 George B. Edwards (born March 21, 1835 in Hillsboro, Ohio ) was a foreman for the Woodward Iron Company and a real-estate developer known as the "Father of Brighton".

Edwards' father died when he was a young boy and he stayed to work the family farm until his ambitions compelled him to engage in other business. He took work with the railroads as a brakeman and conductor, but left in the 1850s to trade in scrap iron at Wheeling, West Virginia. While there he began doing contracting work and helped assemble several furnaces in the upper Ohio Valley.

It was there he became associated with the Woodward family and accompanied them to the Birmingham District in 1880 as a foreman. He bought a large tract of land in what is now Brighton and surveyed and subdivided much of it for sale as lots— publicizing the area's virtues and extending credit to families in order to secure the success of the venture. He constructed the first Methodist church and school in the community and operated a mercantile store.

In 1899 Edwards established a lumber business in Bessemer.