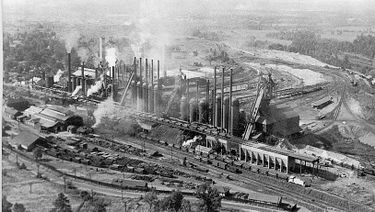 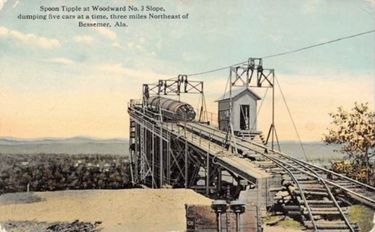 Tipple at Woodward Mine No. 3

The Woodward Iron Company was one of the nation's largest suppliers of pig iron, employing more than 2,000 workers in the 1920s. The company operated mines, quarries and furnaces in western Jefferson County, all connected by a private industrial railroad. The company was founded on December 31, 1881 by brothers Joseph and William Woodward. Much of the land developed by the company for mining and manufacturing had been purchased in 1869 as an investment by their father Stimson Woodward, owner of the La Belle Iron Co. in Wheeling, West Virginia.

A headquarters office was located at the company's first ore mine at Tanyard Gap through Red Mountain in Bessemer. The community of Red Ore grew up around that facility, with a company-built infirmary, commissary and elementary school. The company developed two other ore mines, Woodward Mine No. 2 and Mine No. 3 south of Lipscomb and later operated the Songo Slope Mine two miles to the east and the Pyne Mine, a shaft mine drilled near Lacey's Chapel in Shades Valley in 1918.

The Woodward Furnaces were constructed on the former Fleming Jordan plantation between Hueytown, Brighton and Dolomite. The site was chosen because it was roughly equidistant between the ore and coal mines. The first furnace went into blast on August 17, 1883. Two other blast furnaces were completed, along with as many as 500 coke ovens, before 1909, increasing daily output of pig iron to 1,000 tons and yearly output to more than 250,000 tons. The community of Woodward grew up around the furnaces.

The 50-mile Woodward Line industrial railway delivered ore and coal from Woodward's mines to the furnace site. The railway made a connection with TCI's "High Ore Line" at Wenonah before zig-zagging up the north face of Red Mountain to Woodward's mine openings further west.

William Woodward left the business to his brother, and it passed to Joseph's son, A. H. "Rick" Woodward, who became president in 1910 and chairman at his father's death in 1917. He oversaw the acquisition of the Birmingham Coal & Iron Company in 1912, increasing Woodward's access to productive coal mines, and eventually began development of the company's fourth and final blast furnace which was completed in 1951, extending production capacity to 720,000 tons per year.

Woodward's ore mines were idled during the Great Depression but reopened to supply the high demand for metals during World War II. Mine No. 3 was the last operating ore mine on Red Mountain, closing in 1953. Its tipple continued to be used to transfer ore brought by truck from Songo and Pyne onto the company's rail cars until Pyne finally closed down in 1972. The Woodward Iron Company's mines had been acquired by the Mead Corporation in 1968. The furnaces were shut down in 1973. The Koppers Company purchased the site and continued to use the ovens to produce coke for a few years.

By the mid-1970s, all of the Woodward Iron Company's former facilities were idle.