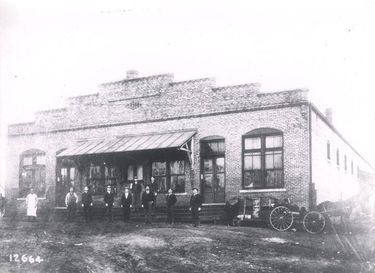 Dolomite is an unincorporated community in western Jefferson County. Parts of the community have been annexed into neighboring Birmingham and Hueytown. The section in Birmingham is recognized as the Dolomite neighborhood, part of the Ensley community in the city's Community Participation Program.

The area of Opossum Valley was first settled around 1815 by William Brown, and soon later by James Rutledge. The Bethlehem Methodist Church was established at Rutledge Springs in 1818. A post office for the community, formerly called Brown Town, but then known as Earle, opened on April 22, 1878. David Brown opened a D. W. Brown Mercantile Co. store on Edwards Street.

After the Dolomite Baptist Church was organized in 1885, circuit pastors would come every other Sunday, so most residents attended both on alternate weeks. The area remained a farm settlement through the early 1880s, when various mining ventures began.

Dolomite Mine No. 1 was opened in 1884. The backers were seeking dolomite limestone, a fluxing agent which gave the community its name. More importantly, however, they struck a rich vein of coal. The Woodward Iron Company sank two more mines and the community experienced a boom in economic activity. The company built several community facilities in the Sweet Gum Flat area, including a commissary, community house, school and meeting house, and an infirmary. The post office name was officially changed to "Dolomite" on August 31, 1885.