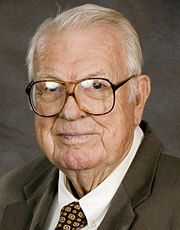 Gil Wideman (born May 25, 1927 in Walker County; died November 23, 2011 at UAB Hospital) was a gynecologist and member of the Birmingham-Jefferson Civic Center Authority. He became one of the first physicians to integrate his clinical practice, as well as one of the first to hire an African-American nurse.

Wideman served in World War II and with the Army War Crimes Tribunal in Nuremberg. He then came to Birmingham in 1948. He graduated from Birmingham Southern College and the University of Alabama School of Medicine. He later became a clinical professor at UAB. Over the years, Wideman served as chairman of the Alabama Certificate of Need board, chairman of the Finance Committee of the Alabama Republican Party, and president of the Birmingham-Southern College National Alumni Association. At age 70, he earned his juris doctorate from Birmingham School of Law.

Wideman's wife, Frances, whom he married in 1949, was a founder of the Birmingham chapter of the Eagle Forum.

Wideman was first appointed to the BJCC board in 2006 and was noted for his stewardship of the authority's expenditures. He returned for a second term in 2011.

Wideman was critically injured in a four-car collision on U. S. Highway 280 near Valleydale Road on November 17, 2011. He died five days later, surrounded by family members. Funeral services were held at Our Lady of Sorrows Catholic Church.