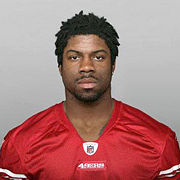 Glenwood Razeem Coffee Jr (born May 1, 1987 in Valparaiso, Florida) is a former running back for the Alabama Crimson Tide football team and the San Francisco 49ers of the National Football League. He played three seasons at Alabama, excelling as a junior when he won the starting job from Terry Grant and led the team to the SEC Championship Game, earning MVP and All-SEC honors. He left after his junior season for the NFL where he had success as a rookie. He retired, however, just before the 2010 season, in order to focus on his spiritual priorities.

Coffee's father, an employee of McDonnell Douglas, brought the family to Saudi Arabia during Glen's early childhood, moving back to the U.S. when he was nine. A self-described "skinny kid", Coffee excelled in football by outrunning his opponents. He remained with his mother after his parents' divorce and credits her with teaching him good character.

As a senior at Fort Walton Beach High School, Coffee He led his team to the regional championship game with 1,886 yards rushing, 350 yards receiving and 29 touchdowns. He identified the Southeaster Conference as where he wanted to play college football, and accepted his only SEC offer, from Alabama coach Mike Shula.

Wearing #38, the true-freshman Coffee appeared in all twelve games played by the 2005 Alabama Crimson Tide football team. On September 17, he rushed for a season-high 75 yards on 15 attempts in a 37–14 over South Carolina. For the rest of the season, he shared time with Jimmy Johns backing up starter Ken Darby. He scored his first touchdown in the homecoming game against Utah State, hauling in a 9-yard pass from quarterback John Parker Wilson.

For the season, Coffee rushed for a 179 yards on 48 attempts. He also caught eight passes for 91 yards, including one touchdown.

Coffee redshirted for his second year in college. Through his roommate, track-team sprinter Matt Watson, he was led to attend church and eventually to dedicate his life to Christ. He became an active participant in the Fellowship of Christian Athletes and found peace and motivation in religion.

Coffee returned to the 2007 Alabama Crimson Tide football team under new head coach Nick Saban. In that season, he split time as the starting running back with freshman Terry Grant. In the season opener versus Western Carolina, Coffee rushed nine times for 76 yards and one touchdown in a 52–6 victory. In the season's homecoming game, he had his first 100-yard rushing game in a 30–24 win over Houston. On that day he rushed for 121 yards on 30 attempts and one touchdown, and also caught one pass for six yards.

Coffee did not accumulate any statistics in four of Alabama's final five games, but did figure into the Tide's 30-24 victory over Colorado in the 2007 Independence Bowl. He carried the ball 19 times for 72 yards in that game, finishing the season with 545 yards on 129 carries, scoring four touchdowns. He caught 18 passes for 142 yards.

As a junior, Coffee was named the starter for all 14 games of the 2008 Alabama Crimson Tide football team, though he shared time with Roy Upchurch and Mark Ingram Jr. In the fourth game of the season, a 49–14 rout of Arkansas, he carried the ball ten times for 162 yards and two touchdowns, including his career-long run of 87 yards. In the following game, he again scored twice in a 41–30 upset over #3 Georgia, finishing the game with 23 carries for 86 yards. Coffee's career best game came the following week during a 17–14 win over Kentucky, as he ran for 218 yards on 25 attempts, including a 78-yard touchdown run in the first quarter. His 218 yards was the most by an Alabama running back in one game since Shaun Alexander in 1996.

Alabama clinched a berth in the 2008 SEC Championship Game with a 27–21 overtime victory over LSU, in which Coffee rushed for 126 yards and one touchdown. In the annual Iron Bowl, he ran for his fourth 100+ yard game in a 36–0 rout of rival Auburn with 144 yards and one touchdown. After rushing for 112 yards in the SEC Championship game loss to Florida, Coffee was held to his season low in the 2009 Sugar Bowl against Utah. The Utes defense held Coffee to 36 yards on 13 attempts in a 31–17 Utah victory.

In his best statistical season at Alabama, Coffee ran for 1,383 yards and ten touchdowns, while averaging 5.9 yards per carry. With his season's performance, Coffee was voted the team's Most Valuable Player and shared the team's "Derrick Thomas Community Service Award" with Cory Reamer. He was also named to the Associated Press All-SEC first team.

On January 9, 2009 Coffee announced he would forgo his Senior year and declare for the 2009 NFL Draft. He was drafted with the 74th overall pick (3rd round) by the San Francisco 49ers. During his rookie season under Coach Mike Nolan, he saw significant playing time early in the season while starter Frank Gore was injured. He carried the ball 25 times versus the Minnesota Vikings on September 27, gaining 54 yards. A week later he got his first start against the St Louis Rams, and rushed for a career-high 74 yards, to which he added four receptions for 32 yards. For the season he amassed 226 yards and one touchdown in 83 carries. He also caught 11 passes for 76 yards.

During training camp in 2010, Coffee unexpectedly announced his retirement from professional football. He later explained that his conversion to Christianity during college made football less of a priority in his life. First year head coach Mike Singletary said that sixth round draft pick Anthony Dixon and veteran Michael Robinson would compete for the number 2 running back spot and that Coffee's departure would not be a distraction to the team.

Coffee planned to return to Tuscaloosa to finish his undergraduate degree and perhaps continue on with graduate school. That October he was arrested in Fort Walton Beach, Florida for possession of a concealed firearm following a traffic stop. The charges were later dropped. He did graduate with a degree in consumer affairs.

On February 4, 2013 Coffee enlisted in the U.S. Army and enrolled in Airborne School in preparation for application to the Special Forces.