This article is about the NFL running back. For the UAB athletic director, see Mark Ingram. 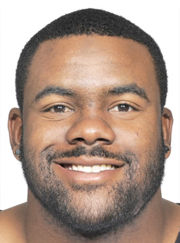 Mark J. Ingram Jr (born December 21, 1989 in Hackensack, New Jersey) is a running back for the New Orleans Saints, a former star for the Alabama Crimson Tide football team, and the winner of the 2009 Heisman Trophy for the most outstanding player in college football.

Ingram, the son of former NFL wide receiver Mark Ingram, Sr, played high school football in Flint, Michigan at Grand Blanc Community High School as a freshman and sophomore, then transfered to Flint Southwestern Academy. As a junior and senior he ran for 4,926 yards and scored 58 touchdowns. In his senior season he also played on defense, recording 84 tackles and 8 interceptions. For his exploits he earned numerous awards and was named to Michigan's All-State team and was ranked as a four-star athlete by the Rivals recruiting service.

He was recruited to the University of Alabama by Nick Saban who was an assistant coach for the Michigan State Spartans while Ingram, Sr was playing there. He played behind Glen Coffee in his freshman season and was often used in goal-line situations, recording 12 touchdowns, a freshman record at Alabama. He was named to the Freshman All-SEC team.

As a sophomore, Ingram became the starting tailback in a balanced offense. He was named Player of the Game after rushing for 150 yards and scoring twice in the season opener against #7 Virginia Tech in the Georgia Dome. His gaudiest numbers came against South Carolina when he ran for 246 yards and was named SEC Player of the Week. He gained a reputation for excelling in the biggest games and soon earned notice in the Heisman Trophy race. He struggled against the Auburn Tigers in the 2009 Iron Bowl, but returned to top form in the SEC Championship Game against top-ranked Florida, gaining 189 total yards and scoring 3 touchdowns in the 32-13 victory. During that performance he eclipsed Bobby Humphrey's single-season rushing record at Alabama.

Ingram was selected as the SEC Offensive Player of the Year. He was announced as the recipient of the Heisman Trophy on December 12. He was the first Crimson Tide player to be so honored.

The New Orleans Saints picked Ingram with the 28th pick of the 2011 NFL draft. He signed a four-year contract worth $7.41 million with a $3.89 million signing bonus. He scored his first touchdown as a Saint in a pre-season game against San Francisco on August 12. His first regular-season score came on a 13-yard run against the Houston Texans on September 25.