This article is about the original Gus's Hot Dogs in downtown Birmingham. For other hot dog stands using the same name, see Gus's Hot Dogs (disambiguation). 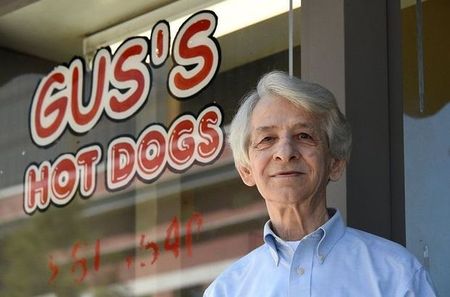 Gus's Hot Dogs is a hot dog stand located in a narrow space in a parking deck at 1915 4th Avenue North in downtown Birmingham. When Greek immigrant Gus Alexander first opened it in 1947, it was on the same block at Birmingham City Hall.

Alexander sold the business to Alex Choraitis in the 1960s before moving back home to Greece. Choraitis, in turn, asked another Greek-American, George Nasiakos, to move to Birmingham from Chicago, Illinois to take over the restaurant in the mid-1990s. The sale closed on March 23, 1995. Nasiakos, known as "Mr George", modified the secret recipe sauce to make it a little bit milder.

When Nasiakos retired in April 2017 he sold the business to long-time customer Lee Pantazis and returned to Chicago. Long-term employee Carl Lee Alexander, known as "L.A.", stayed on to help Pantazis learn the ropes.