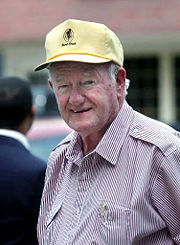 Thompson was one of four children born to DeWitt C. and Mary Gibson Thompson of Nashville. He attended Duncan Preparatory School, graduating in 1941, and was enrolled at Vanderbilt University, but left to serve in the U. S. Army Air Corps, loading bombs into airplanes during World War II. He served in the Pacific from March 1943 to January 1946, then resumed his studies while working at General Truck Sales in Nashville.

Thompson purchased the North Alabama Caterpillar dealership in Birmingham in 1957 and cultivated it into one of the country's largest heavy equipment dealers and service companies. The company expanded to South Alabama and the Florida panhandle in 1987.

Through his Thompson Realty, he commissioned legendary golfer and course designer Jack Nicklaus to lay out the championship-caliber course at his Shoal Creek Golf and Country Club in 1977. The course played host to the 1984 and 1990 PGA Championships and the 1986 USGA U. S. Amateur Tournament.

Just prior to the 1990 tournament, then-Birmingham City Council member William Bell triggered a controversy by arguing that the city should cancel its $1,500 print ad in the event program because of the club's discriminatory membership policies. Thompson fueled the controversy by telling Birmingham Post-Herald reporter Joan Mazzolin that "bringing up this issue will just polarize the community...but it can't pressure us.... We have the right to associate or not to associate with whomever we choose. The country club is our home and we pick and choose who we want.... I think we've said that we don't discriminate in every other area except the blacks."

After the publication of Thompson's remarks, several broadcast sponsors withdrew their support from the event, and the PGA threatened to cancel it altogether. Mayor Richard Arrington, Jr and club and PGA officials met to negotiate a compromise, with the result that Thompson agreed to step down as board chairman, Booker T. Washington Insurance Company president Louis Willie was given an honorary membership, and the club began recruiting a regular black member. The tournament proceeded without visible protests, but the fallout from Shoal Creek led numerous other private golf clubs around the country to open their doors to minorities as well.

Thompson was also active in civic affairs. He directed the Birmingham Chamber of Commerce, the Alabama Chamber of Commerce and the Associated Industries of Alabama. He also served on the Crippled Children's Foundation board and was a member of the Rotary Club of Birmingham and a trustee at Vanderbilt University. He partnered with John Harbert III to build the downtown Harbert Center which hosts meetings for the Rotary Club, the Kiwanis Club of Birmingham, the Crippled Children's Foundation and the Monday Morning Quarterback Club.

In 2007 Thompson announced his interest in purchasing the unfinished "Digital Hospital" on U. S. Highway 280 from the troubled HealthSouth Corporation and completing it as a full-service hospital. Because his group was not able to secure the support of an established hospital, it was not able to apply for a permit from the state's Certificate of Need Review Board.

Thompson and his wife, the former Lucille Ryals, had five children and eight grandchildren. He died in October 2010.