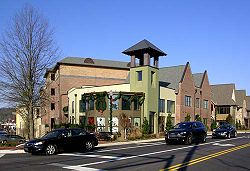 From the southwest along Oxmoor Road in December 2009.

Hallman Hill is the name of Arlington Properties' a 5.4-acre mixed-use development being constructed on the site of the former Homewood Gardens Apartments in Homewood. Construction of the $37 million project began on December 6, 2007, with completion of the first phase in the Summer of 2009.

Phase I, the eastern portion, included the Clifton, Carlisle and Shannon buildings, with 72 condos and 9,000 square feet of retail space. The condominiums were priced in the range of $239,000 to $700,000 and 45 were sold before ground was broken.

Tenants at Homewood Gardens were originally asked to leave during the first part of 2006 in expectation of demolition starting on August 1. Arlington later decided to build the project in phases and re-opened 76 rental units on the west side of the complex for short-term tenants. Demolition for phase I began in spring 2007.

The $20 million second phase of the project ("The Hill"), which was to include 122 condominium units and 4,000 square feet of retail space, was changed to 122 apartments with no retail when Arlington began construction in February 2011.