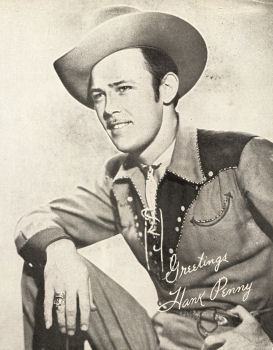 Penny was the son of a coal miner who performed at an amateur level as a poet, magician and guitarist. He died when Hank was 10 years old. Within a few years, Hank was making a name for himself on local radio. He began his professional music career at WWL-AM in New Orleans in 1936. He latched onto the popularity of western swing music as played by Bob Wills and Milton Brown.

In 1937, back in Birmingham, he formed the Radio Cowboys, a popular swing band featuring Julian Akins, Sammy Forsmark, Louis Damont, Carl Stewart and Sheldon Bennett. His hillbilly emcee delivery and musical style, heard on the radio in Birmingham, were major influences on rockabilly pioneer Hardrock Gunter. The band recorded a set of songs for producer Art Satherly and relocated to Atlanta to perform on the Crossroad Follies. In 1939 the band moved again to Nashville and recorded more songs, but its run was interrupted by the entrance of several members into the military for World War II.

Penny moved to Chicago during the early days of the war and worked as a disc jockey. He recorded a couple of songs in North Carolina and then took a job with the Boone County Jamboree and the Midwestern Hayride, both shows originating from Cincinnati's WLW-AM. He formed a new band, the Plantation Boys, with Stewart, Louis Innis, Zed Tennis and Roy Langham. The group backed artists like the Delmore Brothers, Merle Travis, Grandpa Jones and Doris Day. Beginning in 1944 the Plantation Boys joined the USO tours.

After the war, Travis invited Penny to join the emerging county music scene in Los Angeles. He was fronting an all-girl band when he got an offer from Spade Cooley's manager to front a new western swing band that would fill dates for which Cooley's or Tex Ritter's bands were unable to perform. His "Painted Post Rangers" accompanied him to the studio for three Billboard top-ten country singles: "Steel Guitar Romp" (1946), "Get Yourself a Red Head" (1946) and "Bloodshot Eyes" (1950), all three of which peaked at #4.

When the Painted Post Club closed, Penny led the house band at the Riverside Rancho. He took a few film roles as a singing cowboy and joined the ABC program "Roundup Time" as a comedian. Later he formed a new group, the Penny Serenaders with Speedy West, Bud Sievert, Billy Hill and Hank Caldwell. He and Amand Gautier opened a dance hall, booking acts like Bob Wills.

In June 1948 Penny joined Cooley's wildly-popular "Hoffman Hayride" television show. He was seen most in the character of backwoods jokester "That Plain Ol' Country Boy". Penny and Gautier opened a new venue, Hollywood's Palamino Club, in 1949. The club hosted many well-known and up-and-coming country acts. Monday nights were opened to jazz musicians after hours, with black-eyed peas, cornbread and buttermilk served to all comers. Penny himself recorded an album of jazz-influenced "hillbilly bop" in 1950.

Penny left Cooley's show to appear on Dude Martin's competing program. Instead he fell in love with Martin's wife, Sue, a popular county singer. Penny hosted his own "Hank Penny Show" in 1952, but it was cancelled after a short seven week run. Sue divorced Martin in order to marry Penny in 1953. The couple briefly hosted another Los Angeles-based television program before moving to Las Vegas in 1954 to headline at the Golden Nugget Casino. He kept that gig for seven years, fronting a big band that included Roy Clark.

Penny cut a genre-bending jazz album in 1961. After he and Sue divorced in 1963, he recorded a comedy album and moved to Carson City, Nevada where he teamed with Merle Travis' son, Thom Bresh. He returned to Nashville to audition for a spot on the CBS country - variety show "Hee Haw", but lost out to Roy Clark.

Penny married his fifth wife, Shari, in 1967. Their daughter, Sydney, born in 1971 became an actress. His other son, Greg, is a music producer. Penny retired to California and died in 1992 of a heart attack.