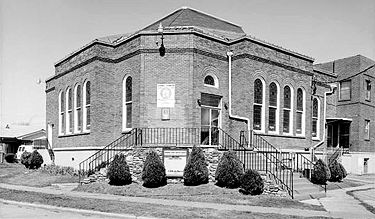 The church was established in 1888 by the Mount Pilgrim Baptist District Association under the leadership of William Pettiford and moved to its present site before 1911. The current sanctuary building was constructed for $1,200 in 1924. Wallace Rayfield was the architect, and Nathan Stroud was the builder.

The sanctuary has an unusual diagonal alignment within the 60-foot by 60-foot square building. The lobby is on the southeast corner. The entry doors open on a central aisle that terminates with a curved-front pulpit platform, in which is sunk the baptismal pool. The northeast and southwest corners are divided from the main space as vestibules with storage above. The northwest corner is the pastor's study. The resulting cruciform plan has tall window bays on the east, south and west, while the north bay houses the choir loft.

In 1933 a group of former members of Harmony Street Baptist founded the First Baptist Church of Irondale. An education wing was added to the north side of the building in 1949. A parsonage was built in 1962. Many members, who had built homes nearby, were dislocated by the Housing Authority of the Birmingham District's "urban renewal" project to build the public housing project Tom Brown Village.