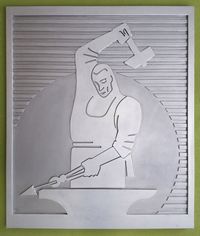 The project was first announced in August 2011 by developer Rakesh Patel of AUM Enterprises in Pelham. Construction was initially expected to begin in March 2014. The nearby Five Points South YMCA was demolished for parking.

The design by Atlanta, Georgia-based Richard Rauh & Associates, a firm with extensive experience with Hilton hotels, includes a reconstructed version of the existing building's limestone Art Deco facade as a screen in front of the entrance drive. The hotel includes an indoor pool and fitness center. Each of the hotel's 105 guest rooms includes a full kitchenette.

Wyatt General Contractor began work on the $23 million project in April 2015. A ribbon cutting signifying its opening was held on February 28, 2017.