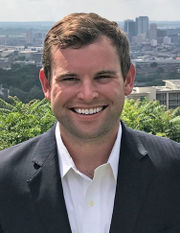 Hunter Williams is the founder of Neurosafe, a reserve deputy sergeant for the Jefferson County Sheriff's Office, president of the Crestline Neighborhood Association, and a candidate for Birmingham City Council District 2 in the 2017 Birmingham municipal election.

Williams grew up in Crestline and earned a degree in finance from Southern Methodist University in Dallas, Texas in 2009. He worked as a manager for Molton, Allen & Williams until 2014, and then founded Neurosafe which provides risk management planning and other services for neurosurgical practices.

Williams graduated from the Jefferson County Sheriff's Academy in 2010 and serves in the reserve unit's Uniformed Patrol Division. He also serves on the junior board for Cornerstone Schools of Alabama and is a member of the Rotoract Club of Birmingham and Independent Presbyterian Church. He was elected without opposition to serve as neighborhood president for Crestline in 2016.

As a candidate for City Council, Williams hopes to place dedicated patrol officers in each Birmingham neighborhood, and to ensure maintenance funding for parks, sidewalks and other public property to benefit economic development.