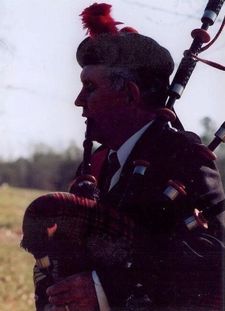 Sturrock was the son of Lawrence and Mary Frier Sturrock of East Ayrshire, Scotland. He attended the Kilmarnock Academy and began learning to play bagpipes at the age of twelve. He joined his school's Cade Corps on December 12, 1932 and by 1940 was promoted to Pipe Major of the Cadet Pipe Band.

Sturrock served in the Royal Air Force during World War II and trained as a fighter pilot in Tuscaloosa. After the war he returned to Alabama where he married and started a family. In the 1960s, Sturrock began teaching bagpipes and formed a pipe band which still performs under the sponsorship of the Saint Andrews Society of the Middle South.