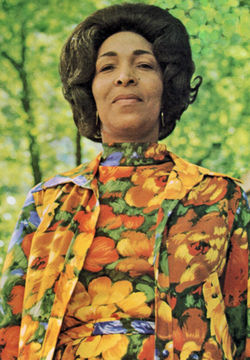 Inez McConico Andrews (born April 14, 1929 in Birmingham; died December 19, 2012 in Chicago, Illinois) was a Gospel vocalist. Though she sang contralto, she was known in her day as "Songbird," or the "High Priestess" for her limitless upper range.

Inez was raised by her father, Theodore McConico, after her mother, Pauline, died when she was just two years old. He worked in the coal mines, but was often out of work during the Great Depression. Inez married Robert Andrews early in her teens and had two daughters before divorcing him at age 18. She worked 10-hour days, six days a week as a maid in order to support her family, including some time washing the steps of the Jefferson County Courthouse. She sang in church and used scraps of brown bags to write down lines she composed in her head.

Andrews got her start as a professional singer with Carter’s Choral Ensemble and the Raymond Raspberry Singers in Birmingham in the 1940s. In 1952 she was invited to join the Gospel Harmonettes as an understudy for lead vocalist Dorothy Love Coates.

James Cleveland heard her perform with the Harmonetts in Nashville, Tennessee and recommended her to Albertina Walker, leader of the Chicago-based Gospel group The Caravans. Andrews joined the group in 1957 and made an immediate impact by singing lead on two of the group's biggest hits that same year, "I'm Not Tired Yet" and "Mary Don’t You Weep". She made the latter song her own by borrowing Coates' sermonizing style. She also sang lead on "Hold to God’s Unchanging Hand," "He Won’t Deny Me," and "I’m Willing to Wait," which was her own composition.

Andrews left the Caravans in 1962 to start her own group, Inez Andrews and the Andrewettes, which toured Europe to great acclaim. Her second husband, Richard Gibbs, died in 1964. After five years with the Andrewettes she shed the group to tour as a soloist.

Through the 1960s, Andrews recorded on the Houston, Texas-based SongBird label, a subsidiary of Don Robey's Peacock Records which was named in her honor. The label was sold to ABC Records in 1973. That same year, she recorded her biggest hit, "Lord Don't Move the Mountain," at the tail end of a session with producer Gene Barge. The song sold a million copies and landed on both the Gospel and R&B charts. She followed that a decade later with another hit, "Just For Me."

Andrews was inducted into the Gospel Music Hall of Fame in 2002. Except for occasional reunions with the other members of the Caravan, she performed infrequently. She married mortician Wendell Edingburg and helped with his business until his death in 2004.

Andrews died of cancer at her home in Chicago in 2012 and is buried at Oak Woods Cemetery there. She was survived by seven children, 19 grandchildren and 12 great grandchildren.