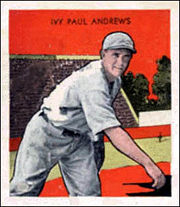 Ivy Paul Andrews (born May 6, 1907 in Dora, died November 24, 1970 in Birmingham) was a right-handed pitcher for the New York Yankees, Boston Red Sox, St Louis Browns, and Cleveland Indians in a Major League career that spanned from 1931 to 1938.

Ivy was born in Dora to John William (or J. T.) Andrews and Rebecca Pairlee (or Paralee) Wilson Andrews. He starred in basketball and baseball at Dora High School, and also played on the school's first football team. After graduating in 1926, Andrews began playing for Industrial League teams in the area, including Sloss Mine of Dora, Empire Mine, DeBardeleben Mine, Pratt Fuel of Dora and Bessie Mine. He outdueled fellow Dora star Earl Washington in a legendary 2-1 contest between Empire and Pratt Fuel.

Andrews played the 1927 season in Selma and, a year later, was signed by Pop Shaw to a contract to play for the Mobile Bears, but was first optioned out to Meridian where he ran up an 18-10 record as a rookie. He started for Mobile in 1929 and was purchased after only a few months by the New York Yankees for $25,000. The Yankees sent him to Albany, where he went 9-1 over the rest of the season. He started the 1930 season in Oakland, California and appeared later with the Birmingham Barons and in Jersey City.

Andrews debuted with the Yankees on August 15, 1931 and earned his first victory, over the Boston Red Sox, on September 3. In 1932 Andrews came down with the flu and a bad case of lumbago. While he was out, he was traded to the Red Sox along with Hank Johnson for Danny McFayden. He finished the season in Boston with a 10-7 record. After the 1933 season he was traded to the Browns along with Smead Jolley for Carl Reynolds. Beset by persistent arm ailments, Andrews was forced to develop a range of pitches to replace his fastball. He became known as "Poison Ivy" for his lethal combination of screwballs, sinkers, sailors, knucklers, curve balls and meat balls.

Andrews' most productive season was the 1935 St Louis Browns campaign, during which he went 13-7 with a 3.54 earned run average, eighth best in the American League. He spent three seasons in St Louis before getting sent to Cleveland in a six-player deal. After shutting out his former Yankee teammates, New York bought him back to boost their pennant chase in August of 1937 for $7,500. He and Joe DiMaggio were roommates for the season.

His only World Series appearance was in that year's subway series against the Giants. He pitched 5 2/3 innings in relief for Bump Hadley in a Game 4 Yankees loss. They won the series, though, and Andrews won a championship ring. Andrews led the American League in earned run average in the first part of the 1938 season, but suffered another round of injuries. He played his final game on September 28, 1938, and did not appear in the 1938 World Series against the Chicago Cubs.

Andrews was optioned back to Albany for 1939 and continued playing in the minors through 1945. The next year he returned to Birmingham to serve as the Barons first pitching coach. The following year he served part of the season as the team's manager.

In the off seasons Andrews coached or officiated for numerous local teams, including the Summit Coal Company and Dora Rinky Dinks basketball teams, as well as the basketball and football teams at Dora High School during World War II, where his wife, Josephine, was a teacher.

Andrews died in Birmingham, at the age of 63. He was survived by his wife who died in 1994. The couple is buried at the Shanghi Baptist Church Cemetery in Quinton. In 1975 Dora High School began awarding the "Andrews Award" to graduating senior athletes. In 1979 the baseball field at Dora Municipal Park was named in his honor, and in 1985 he was inducted into the Alabama Sports Hall of Fame.