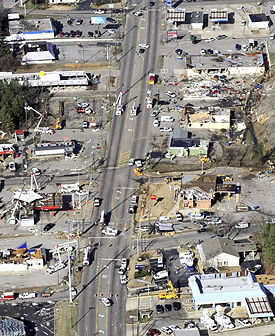 During the late afternoon of January 22, a particularly dangerous situation tornado watch was issued for much of Arkansas and parts of Tennessee and Mississippi. At roughly sunset, severe storms developed along a pronounced line in central Arkansas with the southern cells prompting tornado warnings. Several tornadoes touched down before the storms reformed into a squall line near midnight.

Overnight, another round of tornadoes developed in Alabama ahead of the squall line. Early that morning, more very severe tornadoes hit the western and northeast parts of Jefferson County. Severe damage was reported in those areas, as well as in Chilton County, some of the same places hit extremely hard by the catastrophic April 27, 2011 tornado outbreak. Two people were killed and Center Point Elementary School was destroyed. After an inspection conducted by the National Weather Service in Birmingham, the tornado was rated an EF3, the strongest in 2012.

The heaviest tornado damage occurred in the Oak Grove and Clay/Center Point areas of Jefferson County and in the Maplesville community in Chilton and Perry counties.

Hundreds were injured and two people died during the tornado event: Jefferson County International Baccalaureate student Christina Heichelbech, 16, of Clay, was thrown from her home and found, on her mattress, 40 feet away. Retired trucker Bobby Frank Sims, 83, of Oak Grove, died when his mobile home was thrown hundreds of feet.

Hundreds of homes and businesses were damaged and thousands lost power service due to the storms. Electrical service was restored within days. Center Point Parkway, closed to through traffic immediately after the storm, was reopened on Wednesday. Jefferson County Schools were closed on Monday, with those nearest the damaged areas remaining closed a second day. Center Point Elementary School was heavily damaged by the storm and is slated to be rebuilt. The home of Stan and Jeanne Leo on Winewood Road in Birmingham's Echo Highlands neighborhood was lifted off its foundation, but survived intact. The owners credited their decision to use framing standards developed for hurricane-prone areas. Early estimates of insured damage from the storms ranged from $15 to 30 million.