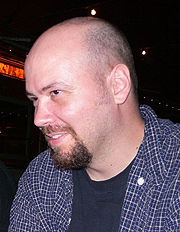 Jason Aaron (born January 28, 1973 in Jasper) is a comic book writer. He is known for incorporating social commentary into his stories, and perhaps best known for creating a female "Thor" for Marvel.

Aaron graduated from Shelby County High School in Columbiana and earned a bachelor of arts in English at UAB. His 5-issue Vietnam War-themed mini-series The Other Side, published in 2006 by DC's Vertigo Comics division, was nominated for an Eisner Award for "Best Limited Series." In January 2007 the first issue of Scalped, an ongoing series set in a Lokota Indian reservation which is written by Aaron and illustrated by R. M. Guéra, was published by Vertigo and was also nominated for an Eisner.

Aaron began writing under contract to Marvel Comics in late 2007 and has since contributed to the Ghost Rider, Wolverine, and The Punisher. Wizard magazine named him "best comic book writer" for both 2008 and 2009 based on his Marvel work. He and his wife live in Kansas City, Kansas, where he participates in the Atomic Revolver comic studio.