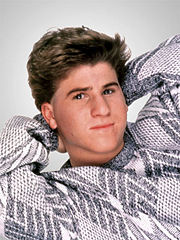 Jason Robert Hervey (born April 6, 1972 in Los Angeles, California) is an actor, television producer and former executive of HealthSouth. He is best known for his role as "Wayne Arnold" on ABC's The Wonder Years.

Hervey, son of a talent agent and retail sales manager. He had small roles as a child in Back to the Future and Pee-Wee's Big Adventure and played a recurring role on the final season of Diff'rent Strokes. His breakout role was playing the older brother of Fred Savage's star character in "The Wonder Years", which lasted for six seasons, ending in 1993.

In 1994 Hervey married Kelley Patricia O'Neal, but they divorced within a year. He married his current wife, Shannon, in 1998. His acting career declined and he became involved in World Championship Wrestling as a producer. After the league folded in 2001, he and WCW Vice President Eric Bischoff partnered to produce a string of reality shows including "I Want to Be a Hilton", "Scott Baio is 45...and Single", and Hulk Hogan's "Celebrity Championship Wrestling". He later joined Mandalay Sports Entertainment as a producer.

During that time, HealthSouth CEO Richard Scrushy contracted with Mandalay to help produce a series of educational programs based on the company's "Go For It! Live" motivational touring shows. He became friends with Scrushy, and was recruited to Birmingham to join the company as an senior vice president for public relations, and was later given the title of chief marketing and communications officer. Among his duties was managing the all-girl pop trio "3rd Faze". Under the nickname "Gator" he appeared alongside Scrushy ("Cowboy") on a weekly radio program on WERC-AM.

In Spring 2003, after an FBI raid and accusations from the Security and Exchange Commission that HealthSouth executives had systematically defrauded investors, Hervey was dismissed. He later sued unsuccessfully for $300,000 in back pay.

Harvey rejoined Bischoff at Total Nonstop Wrestling Action in 2010 and serves as an on-camera interviewer for "Impact Wrestling" and co-hosts VH1's "Confessions of a Teen Idol" with Scott Baio.