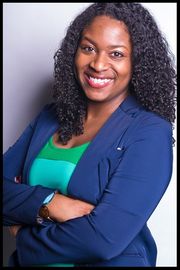 Javacia Nicole Harris Bowser (born February 9, 1981 in Birmingham) is a writer and blogger, a former reporter and English teacher, and the founder of See Jane Write.

Bowser graduated from the Alabama School of Fine Arts in 1999. She earned a bachelor’s degree in journalism at the University of Alabama and a master’s degree in journalism from the University of California at Berkeley. She worked as a reporter and blogger for the Louisville Courier-Journal and then returned to ASFA to teach English literature and writing for the media in 2009. In 2011 she founded "See Jane Write" as an online community of women bloggers and writers. In 2019 she left her teaching job to devote her full time to writing and building her business through workshops, coaching and subscriptions.

Bowser writes a regular column for B-Metro and regularly contributes to Birmingham magazine, WBHM-FM, The Birmingham Times, and StyleBlueprint. Birmingham named her as one of the "Women Who Shape the State," Southern Living included her on a list of "Innovators Changing the South," and the Birmingham Business Journal placed her in their "Top 40 Under 40". She was presented with the SMART Award from the Women’s Fund of Greater Birmingham in 2012 as one of the 'Women Who Inspire" by Girls on the Run Birmingham.

Bowser is married to Edward Bowser. In January 2020 she was diagnosed with breast cancer and underwent chemotherapy and radiation therapy.