From Bhamwiki
(Redirected from WBHM-FM)
Jump to: navigation, search 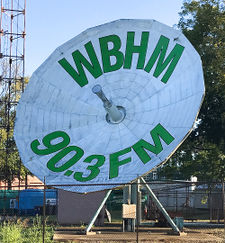 On a sub-carrier channel, WBHM operates the Alabama Radio Reading Service, which broadcasts readings from the Birmingham News and popular magazines for blind and visually-impaired residents of the Birmingham area through a grant from the Alabama Department of Rehabilitation Services. Gadsden's WSGN-FM operated primarily as a re-broadcaster of WBHM's signal.

In 2021 WBHM was named "Radio Station of the Year" by the Alabama Broadcasters Association, and presented with a national Edward R. Murrow Award for Overall Excellence for Small Market Radio by the Radio Television Digital News Association.

In June 2004, WBHM made significant changes to its programming, dropping 7 hours per week of classical music programs, including the live Saturday afternoon broadcast of the New York Metropolitan Opera. The airtime was filled with syndicated news, information and quiz-show programs.

In September, 2006, ratings and listenership data from Arbitron and Audience Research Analysis were reviewed and a decision was made to increase classical music programming from 100 to 108.5 hours per week by dropping some of the less-popular information and quiz shows, as well as a Celtic music show.

On March 31, 2008 classical music programming was reduced from 108.5 to 78.5 hours as the station's music source, the Los Angeles-based Classical Public Radio Network, ceased operations. The shift marked the first time that less than half of the weekly schedule was left to classical music programs. There are plans to add a full-time music option when the station moves to a high-definition digital broadcast in 2010.

In 2020 WBHM assumed the leadership role in the "Gulf States newsroom" collaboration with Mississippi Public Broadcasting and two local public radio stations in Louisiana. The newsroom, which is funded with grants from the Corporation for Public Broadcasting and National Public Radio. is headed by a Birmingham-based managing editor.