This article is about the hospital building now part of UAB hospital. For the former hotel, see Thomas Jefferson Tower. 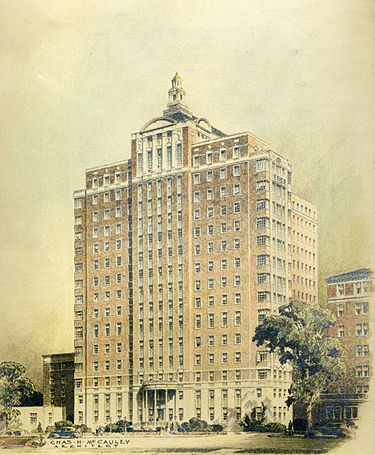 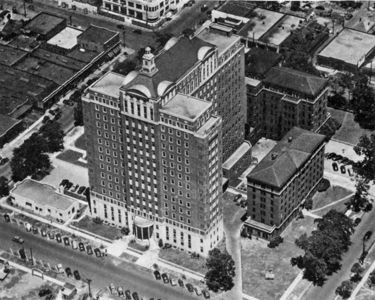 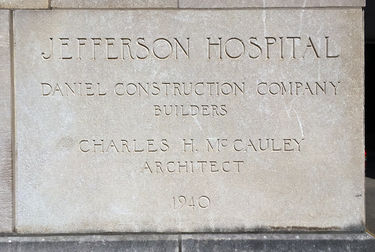 Jefferson Tower (originally Jefferson Hospital) is a sixteen-story, 248-foot-tall hospital building located at 625 19th Street South, which is part of UAB Hospital. It opened in December 1940 as a 575-bed counterpart to the older Hillman Hospital.

The hospital was developed as a project of Jefferson County. The building was designed by Charles McCauley and built by Daniel Construction Company. The T-shaped brick tower steps back at the 14th floor with arched pediments accenting the central section's cornice. A hipped roof above is capped by a small while cupula. The north and south ends of the building feature expansive glazing, including wrap-around corner windows. The base of the tower, as well as the bandings and piers of the upper floors, are clad in limestone.

Ground was broken in December 1938 and construction proceeded for two full years. The building's $2,250,000 construction cost was largely paid for from a $900,000 grant and a $1,100,000 loan from the Works Progress Administration. 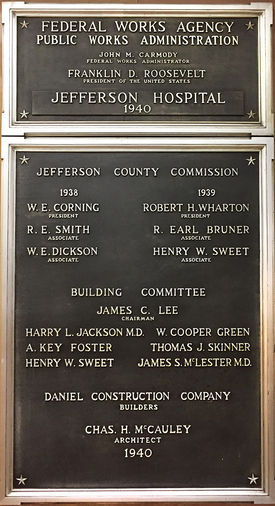 Dedication ceremonies were held from December 26 - 30, 1940, but the hospital didn't admit its first patient until just over a month later. Charles Skelton, one of the carpenters that helped build the hospital, checked in on February 1.

In 1942 the 10th and 11th floors of Jefferson Hospital were used secretly as the national headquarters for the U.S. Army's Replacement and School Command. The headquarters moved to Fort Bragg, North Carolina in April 1944. In December of that year, the University of Alabama signed a 99-year contract with Jefferson County to use Jefferson and Hillman as part of its medical school. The two facilities were merged as the Jefferson-Hillman Hospital under the administration of the Medical College of Alabama on June 4, 1945. The facilities were re-named the University Hospital and Hillman Clinic in 1955.

In 1979, after the construction of several other hospital buildings, the 1940 building was re-named Jefferson Tower.