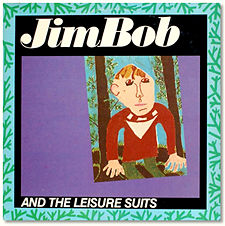 Jim Bob & the Leisure Suits was a band consisting of Matt Kimbrell, Mats Roden, Craig Izard, and Leif Bondarenko. They played regularly in the early 1980s at the Old Town Music Hall on Morris Avenue and at The Nick on Southside.

Kimbrell, Roden and Bondarenko were classmates at the Alabama School of Fine Arts. Roden went on to train as an actor with the Wooster Group in New York. Inspired by a B-52's concert he saw there, he contacted Kimbrell and made plans to launch a punk/new wave group in Birmingham. They added Izard, an attorney, to the group as rhythm guitarist and co-writer.

In addition to their regular gigs, the band performed for the opening of a Jack's restaurant, crashed a broadcast of the Country Boy Eddy Show on WBRC-TV, opened for The Ramones at Brothers Music Hall, and for Bow Wow Wow at Boutwell Auditorium.

The group put out a 5-song EP in 1980, a 45 single in 1981, and a full-length self-titled album in 1982, all on their own Polyester Records. After the album's release, Izard left and was replaced by Charles Muse for the group's supporting dates in New York and the midwest. With no labels interested in giving the record a wider release, the group broke up in 1983.

Roden and Bondarenko went on to form the Primitons with Brad Dorset. Kimbrell formed the Ho Ho Men, which later evolved into the Mambo Combo.