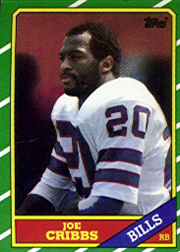 Cribbs was born in Sulligent, Lamar County. He played collegiately at Auburn University along with future NFL backs William Andrews and James Brooks. He began his professional career in 1980 with the Buffalo Bills.

After being drafted in the second round of the 1980 NFL Draft, Cribbs went on to start all 16 games of his rookie year with Buffalo, finishing with 1185 rushing yards and 11 touchdowns. His performance earned him consensus UPI AFL-AFC Rookie of the Year honors and a spot in the Pro Bowl, the only rookie chosen as a starter that year. In five seasons with the team, split around a detour with the USFL, Cribbs had 13 100-yard games and ran for 1,000 yards in a season three times.

In the spring of 1984, Cribbs left the Bills in a contract dispute and signed on as a member of the Birmingham Stallions of the United States Football League (USFL).

Cribbs was inducted into the Alabama Sports Hall of Fame in 1991.

In 2007, Cribbs was named president of Team Alabama, Birmingham's planned AAFL franchise. The league cancelled its scheduled 2008 season just before training camp was to begin. In June 2008 Cribbs was named commissioner of the newly-formed United National Gridiron League, which planned to place a team at Legion Field in 2009.

In December 2016 Cribbs was presented with the Golden Flake Legend of Birmingham award at the 2016 Birmingham Bowl team luncheon.