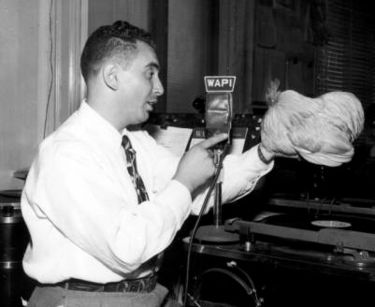 Rumore grew up in Birmingham and on a farm in Huffman. He graduated in 1941 from Ramsay High School and studied speech and radio at Birmingham-Southern College. He got his first radio job with WJLD-AM in Bessemer. After a year he moved to WSFA in Montgomery, then returned to Birmingham to work for WAPI-AM beginning on April 18, 1943.

Using the name Hillbilly Rose he hosted the "Round-Up" program on Saturday evenings, which featured hillbilly songs mixed in with a few gospel numbers. He also hosted the "Yawn Patrol" morning show. Other programs he produced included the "Golden River Boys", "Mid-Morning Melodies", "Round-Up Time", "Songs by Crosby", "Accent on Rhythm", "Wise and Otherwise", "Joe Emerson's Hymns", "Barn News", and "WAPI Dancing Party". One of the station's most popular announcers he regularly received thousands of letters each week from fans. He leveraged that popularity to get listeners to write letters to "shut-ins" whose names and addresses he announced weekly, resulting in even more acclaim.

Besides his radio work, Rumore studied operatic singing and was a member of the Episcopal Church of the Advent choir and the Handel Choral Society. He also performed in a local production of Giuseppe Verdi's Rigoletto.

On April 24, 1954 Rumore opened a music store, Rumore's Record Rack, at 1802 2nd Avenue North (underneath the parking deck). In 1964 he built a home studio in his basement, equipped with a teletype and an NOAA weather wire so that he could broadcast shows live from his home. It was there that 6-year old Sam Rumore, Duke's son, made his radio debut singing "Ave Maria" on a Christmas program. The broadcast equipment, teletype and other items from Joe Rumore's home studio are on display at the Alabama Historical Radio Society facility in downtown Birmingham.