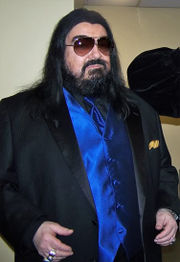 Peebles was the son of Orwin and Marie Peebles. He studied religion at the University of California at Berkeley. He continued to study parapsychology, Kabbalah and other mystical subjects throughout his life, serving professionally as a medium, counselor and paranormal consultant.

Peebles was also involved in the weight lifting community and aspired to promote wrestling. He met wrestler Sam "Bob Kaiser" Tenenbaum while working on the weightlifting set for Stay Hungry in 1975. He took up star Arnold Schwarzeneggar's suggestion to promote Tenenbaum as "The Great Kaiser" and managed the wrestler's career in the National Wrestling Alliance and Continental Wrestling. He participated in the ring as promoter and "protector", and planned publicity stunts, including a staged fight with broadcaster Herb Winches.