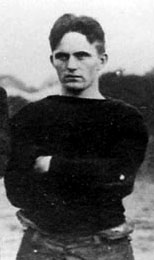 Kirk Newell (born November 4, 1890 in Dadeville, Tallapoosa County; died 1967) is an inductee into the Alabama Sports Hall of Fame.

Newell lettered four years at Auburn University in football and baseball, one year in basketball, track and soccer. During his four years, the football team won 24, lost 4, tied 2 and scored 639 points to opponents' 111. He was captain of the 1913 undefeated Southern Champions gaining 1,707 yards, forty-four percent of the team's total. Through his career he gained 5,800 yards rushing, 350 passing and 1,200 in punt returns. Selected All-Southern, he is listed on Auburn's All-Time Team.

Newell served in the U.S. Army in France during World War I. He was severely wounded when he shielded a group of fellow soldiers from a hand grenade blast. He was awarded the Distinguished Service Cross for his selfless act.

Newell was inducted into the Alabama Sports Hall of Fame in 1994.