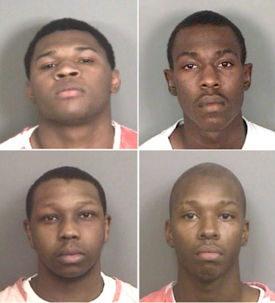 The Lipscomb Four is group of four men; Tarquinne McCain, Lakendall Sims, James Pratt, and Travis Burns; charged in a spree of related violent crimes that took place in May 2007.

The four were each charged with capital murder in the death of Gabriel Alaniz, who was forced into a vehicle at gunpoint near his home at the Woodward Estates trailer park, then robbed and executed at 3rd Place in Lipscomb.

They were also charged with capital murder in the death of Mary Catherine Williams whose decomposed body was found behind a storage facility on Drexel Road and Morgan Road in Bessemer. They are suspected of sexually assaulting the 19-year-old and robbing her of $11 before shooting her twice.

The four were also charged in a home invasion on the 5300 block of 15th Avenue in Lipscomb. An elderly couple, married for 68 years, were beaten in the robbery. $600, a car and a gun were stolen from them.

Sims briefly escaped from custody just prior to a preliminary hearing at the Jefferson County Courthouse Bessemer Division. He was recaptured a day later. He faces additional charges of escape, burglary, robbery, theft and assault.

McCain, who dropped out of McAdory High School during his 10th grade year, pleaded guilty to intentional murder in the Alaniz case and was sentenced to life imprisonment. He received another life sentence and two fifty-year sentences in the other cases.

Pratt and Burns also pleaded guilty to both murders and were both sentenced to concurrent life sentences.