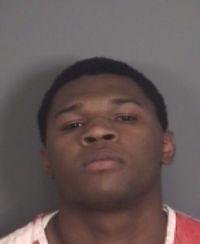 Lakendall M. Sims (born August 1, 1988) is a convicted rapist and murderer. On his way to a hearing in the Jefferson County Courthouse Bessemer Division on September 16, 2008 he escaped, but was re-captured the next day.

Sims is one of four men, the so-called Lipscomb Four, who were charged in the May 5, 2007 robbery and murder of Gabriel Castillo Alaniz, 21, who was found dead at 3rd Place South in Lipscomb. The same four have also been charged with beating and robbing an elderly couple inside their home on the 5300 block of 15th Avenue in Lipscomb. They have also been charged with capital murder in the death of Mary Catherine Williams, 19, whose decomposed body was found behind a building at Morgan Road and Drexel Road Southeast near I-459 on June 1.

Sims was on his way to a pre-trial hearing for one of his murder charges in the 6th floor courtroom of Mac Parsons when he escaped custody. He asked Paul Daniel, the bailiff escorting him, to remove one of his handcuffs so that he could use the restroom. He then overpowered the bailiff, handcuffed him and stole his gun and trousers. The bailiff called 911 on the cell phone Sims had removed from the pocket before taking his pants.

Sims turned the bailiff's uniform pants inside out to conceal the piping. He told reporters that he used the elevator to return to the main floor, waiting while other passengers got on and off, and walked out the annex's main entrance past a guard station. Once outside he hijacked a van from Yvonne Ellis on the 1800 block of 3rd Avenue Bessemer and got away. The van, which Sims says ran out of gas, was recovered in Lipscomb. Officials from the Jefferson County Sheriff's Office, the Bessemer Police Department, and the U. S. Marshals Service conducted an intensive search of the area, blocking off several blocks overnight. One of Sims' attorneys, David Hobdy, made a public plea for his client to turn himself in peacefully.

That afternoon Sims reportedly forced his way into a home in Lipscomb and remained there until evening. He stole $11 in cash and a cell phone as well as several articles of dark clothing. Police continued searching for him through the night. He later told reporters that searchers walked all around him as he lay motionless in the woods.

After he was reported seen changing clothes behind a vacant house in the area, Sims was recaptured by a Birmingham Police officer near an abandoned train trestle in the 5300 block of Jefferson Avenue Southwest just outside the Lipscomb city limits on the afternoon of September 17. The gun he stole from the bailiff was recovered nearby. Sims was newly charged with assault, escape, robbery, kidnapping, burglary, and theft soon later.

Sims, already serving a 20-year sentence at the Donaldson Correctional Facility for second-degree rape, was set to go on trial for the murder of Mary Catherine Williams in November 2008. Judge Mac Parsons declared a mistrial after a prosecutor asked prospective jurors if they had heard about Sims' earlier escape. He was eventually convicted of Williams' murder in a January 2009 trial and sentenced to life in April of that year.