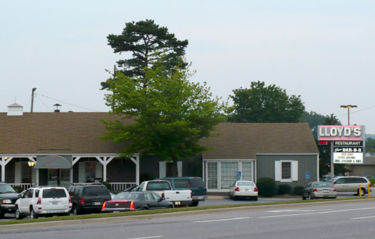 Lloyd's is a casual family restaurant located on U.S. Highway 280. It was founded in 1937 by Lloyd Chesser in a small building on Old Highway 280 (now Chesser Drive) in Chelsea. He operated it with his wife, Margaret.

When Chesser retired in 1971, he offered to sell the business to Eli Stevens, the son Home Baking Company owner Tom Stevens,, who supplied the restaurant. Stevens dawdled, and the deal was closed by his wife, Pat, who telephoned Margaret Chesser to work out the details.

The Stevenses relocated the restaurant to its present site across from Perrin's Grocery in Inverness in 1978. At the time the neighbors were among the few businesses along the pine-shrouded 280 corridor between Birmingham and The Narrows. Since that time the area has seen immense commercial development and the restaurant which was once a landmark is now crowded among other businesses.

The restaurant is well known for its hamburger steaks, onion rings and sweet iced tea. The business served hundreds of customers each weekday and as many as 1,500 on Sundays.

After Eli Steven's death in 2020 ownership of the restaurant passed to his son, Bogue. His children, Eli and Anna help to run the business. In 2022 they opened a second location in Sylacauga.