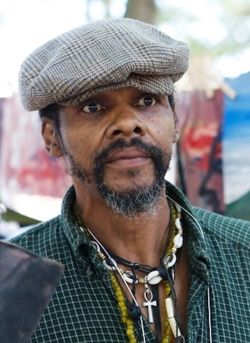 Holley was born the 7th of 27 children and claims to have been traded for a pint of whiskey when he was four years old. He never completed the 7th grade and educated himself by reading National Geographic magazine. He spent part of his childhood at the Industrial School for Negro Children in Mount Meigs, before running away to Louisiana where he started working as a gravedigger, cotton picker and cleaning man. At one point he was hit by a car and says that he was pronounced brain dead. He worked as a short-order cook at Walt Disney World and fathered the first of fifteen children at age 15.

Holley began his artistic life in 1979 by carving tombstones for his sister's two children who died in a house fire. He used blocks of a soft sandstone-like by-product of metal casting which was discarded in piles by a foundry near his sister's house. He believes that divine intervention led him to the material and inspired his artwork: I asked God to give me something so that I may go to the top in life and He did 1

Inspired to create, Holley made other carvings and assembled them in his yard along with various found objects. In 1981 he brought a few examples of his sandstone carvings to Birmingham Museum of Art director Richard N. Murray. The BMA displayed some of those pieces immediately and Murray introduced his work to Barbara Shissler Nosanow, the curator of the 1981 exhibition "More Than Land and Sky: Art from Appalachia" at the National Museum of American Art. That exhibition traveled with two of Holley's pieces, "Baby Being Born" and "Time", both made during 1979 and 1980. 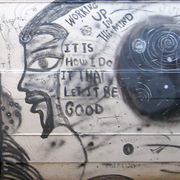 Holley's self-portrait on the side of his van. Photographed October 2006

Soon his work was being acquired by other institutions, such as the American Folk Art Museum in New York and the High Museum in Atlanta. His work has also been displayed at the White House.

Holley also became a popular guest at children's art events, bringing blocks of the foundry stone for children to carve. He made a memorable tour of Birmingham's public elementary schools in 1982-83 and continues to demonstrate his carving skills for children. He gets special pleasure from sharing his experience of learning to love oneself through creative activity.

By the mid-1980s his work had diversified to include paintings and recycled found-object sculptures. His yard and adjacent abandoned lots (which he purchased in 1984 with help from the Museum and New York artist Ed McGowan) became an immersive art environment, termed "one square acre of art" that was celebrated by visitors from the art world and some in the community.

All art is education, to those of us who might understand. All artists should be looked at as workers in a higher sense, they add prosperity to life. 2

Holley's environmental art was also threatened by vandals, scrap-metal scavengers and eventually, by the expansion of the Birmingham International Airport. In late 1996 Holley was notified that his hilltop property near the airport would be condemned. He rejected the airport authority's offer to buy the property at the market rate of $14,000, knowing that his site-specific installation had personal and artistic value he demanded $250,000. The dispute went to probate court and in 1997 a settlement was reached and the airport authority paid $165,700 to move Holley's family and work to a larger property in Harpersville.

The appearance of the dreadlocked artist in small-town Harpersville, accompanied with 5 of his 15 children and a truckload of artworks created from trash, did not please his new neighbors. The house he was moved into had been confiscated as part of a drug investigation, and relatives of the former occupants lived next door. In 1998 shortly after his move to Harpersville, Maurice Garett, of Childersburg fired shots into Holley's home, hitting him in the arm. Later that year Holley was jailed along with his son, Ezekiel, when drugs and stolen property were found at their home during the investigation of an arson and burglary at a golf course. In November 2001, a grass fire destroyed much of the work outside the home. Holley later recalled that he "was living in hell in Harpersville"3

Holley moved to an apartment in the south side of Atlanta in 2010. While there his musical recordings and improvisational performances came to the attention of Lance Ledbetter, owner of Dust-to-Digital. The label has released two full-length albums of Holley's music and he frequently performs in the area.

Holley's work was first exhibited at the Birmingham Museum of Art in a show entitled "Voices in the Wilderness" in 1987. In 2003 he was invited to fill the museum's sunken sculpture courtyard with works as part of the "Perspectives" series.

Holley's first major retrospective, "Do We Think Too Much? I Don't Think We Can Ever Stop: Lonnie Holley, A Twenty-Five Year Survey", was organized by the Birmingham Museum of Art. It premiered in 2003 at the Ikon Gallery in Birmingham, England and opened here in 2004. The exhibit included one piece from each year of Holley's 25-year artistic output.

Curator David Moos called for a re-appraisal of Holley's art outside of the context usually prescribed for viewing so-called "outsider" or "folk" art: "It may now be appropriate to consider his work in relation to the mainstream artworld, and to understand Holley's art is much more meaningful than the result of dire biographical circumstance and inordinate personal challenges." 4

Included in the show were photographs of an installation commissioned by the Birmingham Museum of Art. From May 2003 to May 2004, Holley created a "sprawling, sculptural environment" in the lower sculpture garden as part of the "Perspectives" series of site-specific installations. The creation of the work was documented in the film "The Sandman's Garden" by Arthur Crenshaw.

A 2010 exhibition, "Lonnie Holley: Assemblages and Drawings", was hosted by the Jeff Bailey Gallery in New York City.