This article is about the 1917 building on 3rd Avenue North. For the 1949 store "annex" on 2nd Avenue North, see Loveman's Store for the Home. 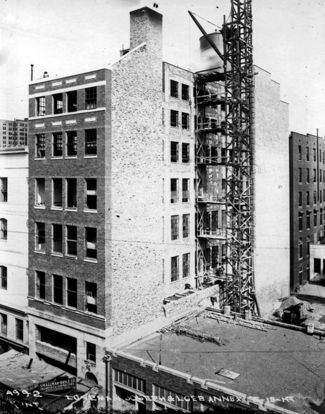 Progress on the construction of Loveman's Annex, May 1917

Loveman's Annex was a 6-story commercial building at 1819 3rd Avenue North, behind the Loveman, Joseph & Loeb department store building that stretches to the corner of 19th Street.

The annex building, of "fireproof construction" supported on a reinforced concrete frame, was designed by the New York firm of Starrett & van Vleck and erected by the Smallman-Brice Co. Photographer Oscar Hunt documented the progress of construction, which was completed in 1917. The roof of the building supported a water tank.

When the Alabama Theatre was built in 1927, the wall facing the Loveman's Annex covered up all of the 10-year-old building's west-facing windows. That wall was designed to serve as a fire barrier, with 36 inches of solid masonry. As it happened, Loveman, Joseph & Loeb's main department store building was destroyed in a massive fire which started in the sub-basement on March 10, 1934. The annex was heavily damaged, but its frame, and a vault containing the store's records, survived. The firewall fulfilled its purpose well, allowing only damage from smoke to affect the Alabama Theatre.

After the fire the annex building was rebuilt on the same frame, and mainly used for staff offices. During the Loveman's building's renovation for the McWane Science Center it was found that the annex's structure was insufficient for its proposed new use. The superstructure was demolished. A newly-constructed section of the science museum took its place, designed to blend the massing, decorative scheme and materials of both its neighbors.