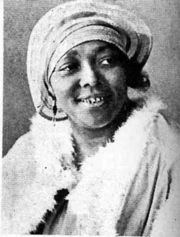 Though born in Mississippi, Lucille was raised in Birmingham. In 1914, she married Nazareth Lee Bogan, a railway fireman with a daughter by his first wife, Estelle, and gave birth to a son, Nazareth Jr, in 1916.

At some point Lucille began performing in juke joints, roadhouses and the Vaudeville circuit. In June 1923 she made her first recordings of Vaudeville songs for Okeh Records in New York, New York with pianist Henry C. Callens. Later that year, she recorded "Pawn Shop Blues" in Atlanta, Georgia with Eddie Heywood on piano.

Back in Birmingham, Bogan approached Harry Charles about recording again. In 1927 he accompanied her and pianist Alex Channey to Chicago to record for Paramount Records. Her first big hit, "Sweet Petunia", came from that session. She also recorded for Paramount with Chicago pianist Will Ezell and with Papa Charlie Jackson that year. Her reputed affair with Ezell led her husband to file divorce papers, but the matter was not finalized until December 1941. She settled in Chicago with her son and recorded for the Brunswick label in 1928 -30 with Tampa Red and Cow Cow Davenport.

Bogan's songs became progressively bawdier and by 1930, she was known for songs like "Sloppy Drunk Blues", "Alley Boogie", and "Black Angel Blues" with explicit references to drunkenness, prostitution and homosexuality. In 1932, after Memphis Minnie's hit cover of "Tricks' Ain't Walkin' No More" Brunswick reissued some of her 1928 singles under the name "Bessie Jackson". She adopted the pseudonym and recorded over 100 tracks for Banner Records beginning in 1933, often accompanied by fellow Birminghamians Walter Roland on piano and Sonny Scott on guitar. She also collaborated with them on a few Jolly Jivers recordings. Bogan's most popular hits from that period included "Seaboard Blues", "Troubled Mind" and "Superstitious Blues". Her final recordings were made on March 5, 1935, including a notoriously uncensored take of "Shave 'Em Dry" accompanied by Roland and Josh White.

After that session, Bogan returned to Birmingham and focused on managing her son's jazz ensemble, Bogan's Birmingham Busters. She reportedly recorded additional songs in Birmingham which have been lost to history. Following her eventual divorce from Nazareth Sr, Lucille took up with the much-younger James Spencer, becoming his common law wife. She moved to Los Angeles, California in 1948 and died that same year of coronary sclerosis. She is buried at Lincoln Memorial Park in Compton, California.