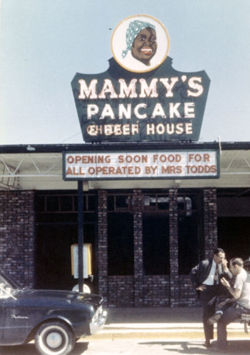 Mammy's Pancakes of Homewood in the late 1960s

Mammy's Pancakes (sometimes called Mammy's Pancakes Chicken Steaks or Mammy's Pancakes & Beef House) was a 24-hour diner with three Birmingham-area locations in the mid 1960s: One in the Gulf Building at 2151 Highland Avenue, another at 1926 29th Avenue South in Homewood, and a third at the Cahaba Heights Plaza. The restaurants were owned by Jesse Todd as part of the Mrs Todd's restaurant chain, founded by his mother, Minnie.

The Homewood location was located next to the St Francis Motel. It was managed by Bill Wiggins and had multiple dining areas: A stately "Queen Anne Room", a casual "Family Room", and the "Red Lion Inn", patterned after an English pub. The space later operated semi-independently as the Red Lion Grill. After the restaurant closed, it became the home of the Red Lion Lounge.