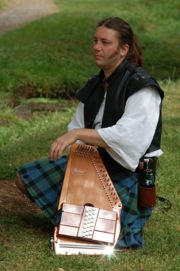 Marc Gunn (born March 17, 1972 in Germany) is a musician and podcaster living in Birmingham. Nicknamed "The Celtfather," he primarily plays the autoharp and performs both traditional songs and his own about cats, kilts, and science fiction. He is also chief editor of the online Celtic Music Magazine and host of the Irish & Celtic Music Podcast.

Gunn was born in Germany to a military family, but spent most of his first ten years in Silver Spring, Maryland. He later moved to San Antonio, Texas, but spent his senior year of high school in Italy, where he has family. Gunn came from a musical family, with his mother playing piano and his father playing folk instruments. Gunn's brother and sister also play instruments.

While studying at the University of Texas, Gunn realized his dream was to play music. With the '90s alternative movement going on, he began as a grunge musician. He later began using the autoharp, a relatively easy instrument, so he could focus on writing lyrics. Gunn then began working at the University of Texas. Having heard stories of Janis Joplin playing autoharp on the university's South Mall, he began practicing there at lunch each day to increase his confidence in playing live. In 1999, Gunn was approached to perform at a local Renaissance fair. He accepted, but was still nervous about playing live, so asked his friend Andrew McKee to join him. This was the beginning of Gunn's first celtic group, the Brobdingnagian Bards.

Gunn and McKee performed together for almost 10 years as the Bards. During that time, they played at numerous Renaissance fairs and were the headliners at the Oscar party for The Lord of the Rings: Return of the King. The two parted amicably to pursue solo careers in 2008. However, they started doing reunions shows every few years in 2012 and eventually began releasing new albums again in 2017.

Gunn married a woman named Gwen in 2010 and the two had a girl later that year. In 2011, the family moved to Birmingham from New Orleans. Gunn then founded the North Alabama Celtic Music Calendar, a website for Celtic artists to list their performances. The family welcomed their second daughter in 2015. Gunn performed regularly at the Pepper Place Saturday Market and the annual St Patrick's Day activities in Five Points South. He also performed frequently at the Interstellar Ginger Beer and Exploration Co.'s tap room in Alabaster.

Toward the end of 2019, Gunn and his family relocated to Atlanta, although he continued to do occasional performances at Pepper Place and Interstellar Ginger Beer.