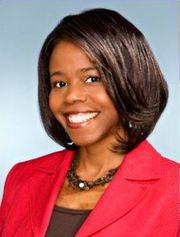 Marquita Furness Davis (born c. 1967 in Peoria, Illinois) is the Pacific Northwest deputy director of early learning for the Bill & Melinda Gates Foundation. She previously worked as director of the Alabama Department of Finance and as executive director of the Jefferson County Committee for Economic Opportunity.

Davis married Michael Davis in 1997. She worked as a minority faculty recruiter for the University of Montevallo and became deputy director of child development services and director of Head Start for JCCEO in 2004.

Davis was appointed Director of the Office of School Readiness and Commissioner of Children’s Affairs by Governor Bob Riley in 2008. She was promoted to Director of Finance by Governor Robert Bentley in 2011.

She has also served on Children's of Alabama's Committee for the Future, the Stephens College of Business advisory board, Alabama Public Television's Early Childhood Advisory Board and WSFA-TV's news editorial board, and the Alabama Council for Excellent Government. She is a 2007 alumna of Leadership Birmingham.

After the abrupt resignation of JCCEO director Gayle Cunningham in 2013, Davis accepted the job of directing the agency and repairing its finances. She left in 2017 to accept her current position with the Gates Foundation.