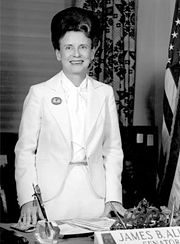 Maryon Pittman Allen (born November 30, 1925 in Meridian, Mississippi; died July 23, 2018 in Birmingham) was briefly a United States Senator, having been appointed to succeed her husband, James Allen, after his death in 1978. She served from June 8 to November 7 of that year.

Maryon was the daughter of John D. and Tellie Chism Pittman of Meridian. She moved with her family to Birmingham in 1926 and was educated in the Birmingham City Schools. She studied journalism at the University of Alabama, but left after two years to marry Joshua Mullins. The couple had three children before ending in divorce in 1959. Maryon found work in an insurance office, but soon found work writing society columns for the Shades Valley Sun and other weeklies. She moved up to the Birmingham News in 1964, but left her job when she married then-Lieutenant Governor James Allen, a Gadsden lawyer.

Allen moved with her husband to Washington D. C. when he was elected to the Senate in 1968. She wrote a syndicated column called “Reflections of a News Hen,” which was carried locally. President Gerald Ford appointed her to chair the Blair House Fine Arts Commission in 1974.

After the death of her husband, Governor George Wallace appointed her to fill his seat until a special election was held. She assumed most of her husband's committee assignments and even presided over the Senate at times. Her only important vote was in support of an unsuccessful measure that would allow states which had already ratified the Equal Rights Amendment to rescind their ratification.

She ran for the Democratic nomination, but was defeated in a runoff by Donald Stewart, who went on to win the general election and take over her seat in November of the same year. Her campaign was hurt by a Washington Post article by Sally Quinn in which Allen was quoted in ways that seemed critical of George and Lurleen Wallace. After the runoff she supported Stewarts opponent, Republican James Martin.

After leaving the Senate, Allen remained in Washington and contributed a regular column, "Maryon Allen’s Washington" to Katherine Graham's Washington Post until 1981. She was on hand to christen the USS Birmingham (SS N695) nuclear submarine. After retiring she returned to Birmingham, buying a home at 3215 Cliff Road. She worked in public relations for Washington auction house C. G. Sloan & Company and began restoring vintage clothing and opened her own Maryon Allen Company, which enjoyed a national clientele. She moved to a garden home on Creekstone Circle in Vestavia Hills in 2004.