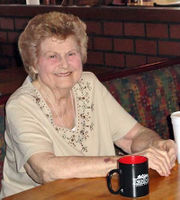 Maxine married Bob Sykes at the beginning of World War II. While he served in the Army, she took a job as a line inspector at a B-52 bomber plant. After the war, Bob Sykes took a job delivering bread for a bakery. When the bakery closed in 1956, he and Maxine opened their first restaurant, The Ice Spot, in Central Park.

The burger joint was a popular hang-out, but by 1964 the Sykeses had tired of working long hours for small returns.

They opened Bob's Hickory Bar-B-Q a few years later just down the street. Eventually they tired of the long hours and began franchising the name to more than a dozen operators in North Alabama and Tennessee. In 1966 the couple returned to the barbecue business and opened a new restaurant in Five Points West, then moved two years later to Bessemer.

After Bob Sykes suffered a stroke in 1970, Maxine took over the business, terminating the franchise agreements to focus her attention on the main store, which she managed along with their son, Van. Together they moved the restaurant to its present location on Bessemer Road in 1977.

Sykes died in 2015 and is buried at Elmwood Cemetery.