Bob Sykes Bar-B-Q is a notable barbecue restaurant at 1724 9th Avenue in Bessemer (Bessemer Road). It is routinely mentioned as one of the best barbecues in Alabama and was called "the best barbecue in the South" by Road and Food Magazine.

Bob and Maxine Sykes' first restaurant was a hamburger and ice cream stand called The Ice Spot, which they opened in Birmingham's Central Park neighborhood in 1957. Sykes, a former delivery driver, traded his 1954 Ford for a one year lease on the building.

Later they moved to a different location in the same neighborhood and Bob added a hickory pit so he could sell the kind of barbecue he had learned to prepare growing up in west Tennessee. The restaurant, now called Bob's Hickory Bar-B-Q was one of the first in the nation to offer drive-through service. 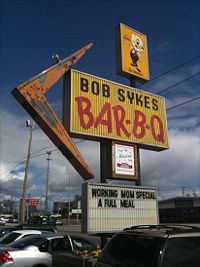 Tiring of the long hours, Bob and Maxine sold franchise licenses to independent operators and took day jobs for a while. In 1966 they returned to the barbecue business full time, opening a new location at Five Points West. Two years later they moved to a larger location in Bessemer and saw their business double. By then there were 14 franchises all across north Alabama and Tennessee. After Sykes suffered a stroke in 1970, Maxine revoked the franchise licenses in order to be able to concentrate on running the main location. Their son, Van Sykes left school in order to help out full time, only later earning a GED diploma. Van enlisted in the Air Force during the Vietnam war, but returned to the business in time to help with the restaurant's 1977 move to its present location on Bessemer Road.

The sole 5,000 square-foot restaurant is currently operated by Van, who has stated that he would not expand beyond the one location because he would be unable to duplicate the quality of the barbecue on another pit in another location. Besides the 100-seat dining room the kitchen supplies barbecue for takeout, representing nearly 70% of the restaurant's business.

On the morning of March 19, 2002 would-be thief Sampson Dearman was found trapped in the shaft of Bob Sykes' ventilator hood through which he had tried to enter the restaurant. Firefighters eventually pulled him back up onto the roof where police took custody. The story made the rounds of several "dumb crook" features.

Bob Sykes' pies and burgers were listed among the "100 dishes to eat in Alabama before you die" by the Alabama Bureau of Tourism and Travel. The restaurant was also featured in the 2006 documentary Holy Smoke over Birmingham produced and directed by Max Shores of the University of Alabama Center for Public TV & Radio.

In September 2009 Sykes opened a second location at the former Furnace Master's Restaurant at Tannehill Ironworks Historical State Park. He sold the business less than a year later to Keith Chapman, who reopened the original restaurant.