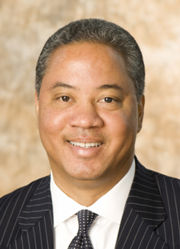 Choy graduated from Holy Family Catholic High School in Birmingham in 1976. He earned his bachelor's degree at UAB in 1980 and his Juris Doctorate at Samford University's Cumberland School of Law in 1984.

Choy worked as an attorney for BellSouth from 1985 to 1992. Since then he has been a partner in the firm of Choy-Lichenstein and at Haskell Slaughter Young & Rediker.

Until 2000 Choy was employed as general counsel to the Birmingham City Council. He resigned following an incident on October 17 of that year in which he verbally and nearly physically assaulted television reporter Cynthia Gould following a Council meeting.

In 2005 Choy was appointed to the Alabama Ethics Commission and served as chairman of the commission from 2009 to 2011. He left Haskell Slaughter following a controversy over the Jefferson County Commission's hiring of a lobbyist with ties to the firm.

Choy joined Burr & Forman in March 2010. He worked primarily as outside council to the City of Birmingham at the recommendation of long-time friend and client William Bell. After Bell left office, Choy's practice has been with the firm's general commercial litigation group.