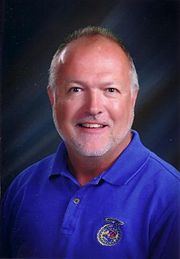 Michael L. Grissom (born c. 1959 in Spruce Pine, Franklin County) is a former teacher, a business owner, and a candidate for the Jefferson County Board of Education, Place 1, in the 2010 Republican primary. He advanced to a run-off with incumbent Jennifer Parsons.

Grissom graduated from Phil Campbell High School in 1977 and earned an associate's degree at Northwest Alabama State Junior College in 1979. He went on to complete a bachelor of science (1981) and master's in education (1985) at Auburn University. He taught agricultural science for 29 years at West Jefferson High School and Oak Grove High School and advised the Future Farmers of America clubs at both schools. He also coached football and basketball. He was named Alabama Outstanding Young Agriculture Teacher of the Year in 1987, and Outstanding Agriculture Educator of the Year for Region V in 1992. In 1993 he received a "Golden Apple Teacher of the Year" award from WBMG 42, and in 1997 he was named "Career Educator of the Year" by Jefferson County Schools.

Grissom formerly owned GH3, LLC, a landscaping a lawn maintenance company which he founded in 1996. Later he joined with Charles Nix to found the Five Mile Creek Canoe and Company, an outfitter on Five Mile Creek in Brookside. He also sings bass for the Gospel quarter Azure. He is married to the former Tynette Murphy, a teacher at Bragg Middle School, and has four children.

Grissom was charged with felony animal cruelty in 2000 for poisoning his neighbor's dogs with antifreeze. The charge was reduced to misdemeanor animal cruelty after Grissom completed an anger management program. In 2003 he was charged with third-degree domestic violence after he pinned his wife's arm in a car door outside Dawson Memorial Baptist Church. He pleaded guilty to harassment and completed another anger-management course and served two years of probation.